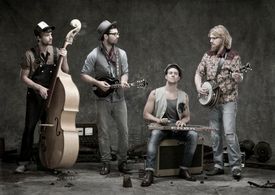 Can four dudes from Germany make American roots music and still be authentic? Do they have the ear, the personal history, the DNA, the dirt under their fingernails to do what American-based string bands do, or will they be forever relegated to being once removed from the American musical experience? If The Dinosaur Truckers and their new self-titled LP are any indication, the answer would be “Ja! Natürlich!”

You didn’t know I knew German, did you? “Ich bin AuslÃ¤nder, ich spreche nicht gut Deutsche!” That roughly translates to, “The Dinosaur Truckers are great, and you should buy their album.”

Many comparisons have been made between The Dinosaur Truckers and the legendary underground .357 String Band that disbanded in late 2011, especially after Saving Country Music posted a couple of videos of the Truckers that presented them as a close facsimile of the .357’s dark, unplugged, punk-infused speedgrass approach. But that is why videos will always be a limited medium compared to an album or a live performance. Listening to The Dinosaur Truckers, the band displays tremendous breadth of sound and influence. Sure, there are still a few compositions that have a similar instrumental lineup to the .357 String Band and blaze out a fast-paced bluegrass songs, but this album also boasts electric and steel guitar, even accordion and trumpet. There are rockabilly influences here, and an attention to lyricism that draws inspiration from Townes Van Zandt. 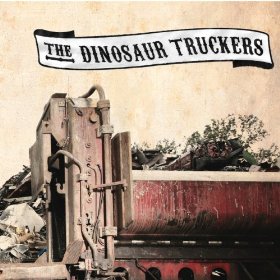 One of the most surprising things about The Dinosaur Truckers is that it shows a lot of restraint in regards to tempo. These are four guys who can play as fast as anyone, but instead of hanging their hats on their most-obvious asset, they make the choice of trying to wow you with composition, lyricism, and tone. They take possibly their best tool out of their repertoire to let you know there’s so much more going on here, that this is not a gimmick, and they don’t have to resort to an instrument-based speed competition to make their music competitive and engaging.

The Dinosaur Truckers are dark, very dark, but not in the easy, devilish, growling lyrics sort of way. They do it with their chord selection, and the message of their songs that never stray too far from a disillusioned sense of a dying world, decreeing their disdain for the direction of man. This is fairly angry music, but not from a lack of intelligence, and not at the expense of playing or singing pretty when the sentiment turns that way. At nearly every turn, you are surprised at how tuned the Truckers’ ears are to the English language, to American roots music, and how smart this music is, evidenced for example in the song “Wolves In The Streets.”

For those hoping for a new source to scratch their unfulfilled .357 String Band itch though, don’t fret, The Dinosaur Truckers have you covered with blazing acoustic songs like “Burn The Place to the Ground” and “Hey People.” But for my money, the can’t miss track of the album is the slow, space-filled, and exquisitely-crafted “Leave Everything Behind.”

The darkness of The Dinosaur Truckers I fear will leave this album inaccessible to some, especially the hardcore twang, old-school country crowd. But as I rummage deep into this album, I fail to find any reason to give it anything else than a top rating. German or not, The Dinosaur Truckers give up nothing to their cross-ocean string band brethren, and maybe could even teach a thing or two to some of the awful punk-gone-country string bands who bring the energy and anger, but not the songwriting and attention to detail. The Dinosaur Truckers are the full package.