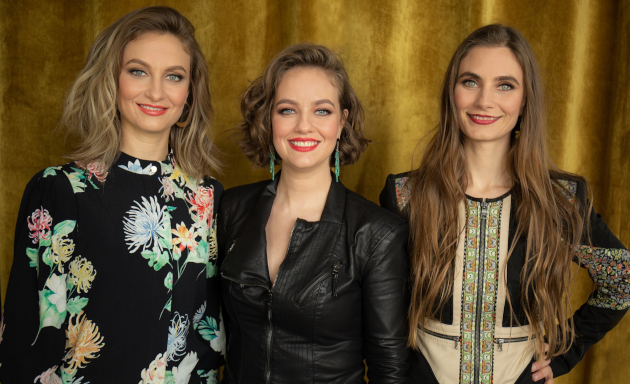 In certain musical circles of Texas, and in the Western Swing community at large, The Quebe Sisters are nothing short of a cultural institution. The incredible 3-part blood harmonies of sisters Grace, Sophia, and Hulda, and the stirring moments springing from their triple fiddles have arguably opened up the appeal for this early country music style to a greater audience than anything else over the last 10 or so years. Hearing their renditions of classic American standards such as Moon Millican’s “Every Which-A-Way,” or Fred Rose’s “Roly Poly” have presented Western Swing to a new audience through magical renditions of old songs that have gone on to become the definitive versions for many. The Quebe Sisters have helped present Western Swing with a vibrancy that few other performers have achieved.

Releasing their first album in 2003, and being long-time touring musicians, they have gained a respect and name recognition in a subgenre of country that often gets unfairly overshadowed by bluegrass. Even though bluegrass commonly boasts the most adept of pickers in regards to technical prowess, it’s Western Swing’s jazz-style chords, arrangements, and demands for improvising that make it one of the most difficult of country music’s disciplines.

But there were always murmurings among some musicians and Western Swing aficionados about The Quebe Sisters that went along the lines of, “They’re great, but they don’t write any of their own songs, and it’s more of a memory game to them.” The implication was that The Quebe Sisters were sort of like your young niece who learned a brilliant concerto on the piano for a recital once, but would struggle to play anything else. They were musicians of recitation as opposed to composition and creativity, however talented and appealing they may be—or so some of the claims went.

This is where their new, self-titled album comes into play. Whether it was to answer those calls to be more creative and original, or a yearning inside themselves to express their own stories for once, this work is The Quebe Sisters trio offering their own expressions to the American roots canon, and doing so in a stunning fashion. 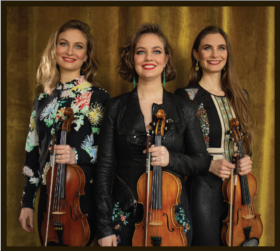 Some may have shuddered when they uttered that most dirty of words in the classic country realm … “pop.” But this wasn’t a warning they were going to be the next Maren Morris. The Quebe Sisters have stuck so close to the Western Swing discipline, and for so long, and they mean so much to that community and it means so much to them, they just wanted to be as up front and honest about their intentions with this new album as possible.

The same astounding three part harmonies still send the heart swooning. It’s still the same instrumental lineup of the three bounding fiddles with a little acoustic guitar rhythm and standup bass behind them. But by branching out ever so slightly from the limitations of Western Swing, The Quebe Sisters were able to open up original lyrical themes, compose inspiring instrumentals, and capture more intimate moments vocally to make a work that is not just all their own, but worthy of distinction throughout the music world.

The allure of The Quebe Sisters has always been their archaic perfection at instilling new life into harmonies. But on this new self-titled record, they set out to explore the mystery in their music, sowing suspense and intrigue into it like never before. Just as much as the words, the melodies and compositions take you on a journey and tell a story where you can’t see what’s lurking around the next corner, and are moved to the edge of your seat, fascinated by what might be coming next.

Though the spry, danceable tunes have often been fan favorites from The Quebe Sisters, here they boldly explore delicate, intimate moments. “Summer of Roses,” “The Waltz You Saved For Me,” or the minute-long introduction to the otherwise upbeat “Lonesome Road” are so gentle and pure, you’re afraid to get too close in fear of tarnishing them, yet are perfectly satisfied to just to stand in their presence to bask and marvel. Instrumentals like “Load at 7 (Leave at 8)” or “Bluegrass in the Backwoods” are worthy standards you could see fitting right beside other timeless instrumental melodies that have been played on the fiddle for over 100 years.

For what it is, The Quebe Sisters is near perfection. It feels like the first two songs selected for the track list perhaps are the least accessible of the bunch. That’s about the only quibble, and offered only as a warning to continue on if you’re lukewarm with your first impression. But otherwise, this is a work of classical string music worthy of recognition in county music and beyond, with arrangements infused with jazz, classic pop, country, and Western Swing that is favorable for changing a mood, slowing down an afternoon, or inspiring a soul.

If there was ever any concern about the gravitas of The Quebe Sisters, it is quickly dispelled with this effort, which is named for themselves on purpose to be a stamp of their own original expressions. They have paid their dues and more, playing the old standards of Western Swing for appreciative audiences from a tender age into adulthood. But now it’s time for them to leave their own mark on music, and with The Quebe Sisters, they do so in indelible ink.

Purchase from The Quebe Sisters