In a just and equitable country music universe, the epicenter of power and influence would not revolve around whatever that mess is going down on Music Row in Nashville, Tennessee, but center on the scene down in the Lone Star State where roots, style, tradition, and substance still mean something to the artists and fans, and have for generations, virtually untouched by fleeting style trends. If a hypothetical switcheroo could occur between Tennessee and Texas at the twitch of the nose, it would immediately put a large measure of quality and roots back into country music at large, and without compromising a lick of entertainment value. It would also put a group like the Randy Rogers Band in the position of perennial Entertainer of the Year contenders as one of the long-standing and highly successful headliners in the greater Texas and Red Dirt music scene.

It’s still true that when you get to the very top of Texas music, you find some of the same compromises and sensibilities that often plague the top of a lot of major music scenes. Some like to razz fellow Texas music members the Turnpike Troubadours for being just a rock band with a fiddle, but that diagnosis is probably more fit for Randy Rogers and his crew. Rogers and his songs are not going to ensnare your imagination in allegorical symbolism, or present a lyrical landscape full of musical Easter eggs and continuous characters across songs and albums for you to decipher like some of Texas’s top songwriters do. But just because Randy Rogers may not demand you think, that doesn’t mean he can’t make you feel. 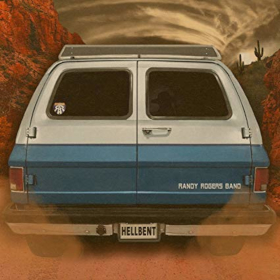 Their latest album Hellbent featuring the band’s original road vehicle on the cover was produced by Dave Cobb, and like any Dave Cobb-produced project, it’s hard to get away from that fact since it acts as the preamble to any announcement or discussion, and for good reason. Dave Cobb’s name has been behind some of the biggest records in country and Americana music in recent memory, though more dialed-in fans know his overall record is a lot more hit and miss, with his “just get here into the studio and we’ll cut this thing in a week” approach working well to capture the rawness of some artists, but for others, leaving their albums exposed or under-developed.

With Hellbent, the Randy Rogers Band went in for a initial session with Cobb, but then took ample time afterwards to settle in and listen to what they had, and ultimately deciding to delay the release for a while and go back in for a second session to see if they couldn’t write and record even better stuff. This patient approach to the recording of Hellbent results in it being hard to find a slacker in the bunch, and builds a new arsenal of regional hits for the band to feature in concert.

Sensible in musical style and songwriting, the guitar playing of Geoffrey Hill gives Hellbent a rock edge and accessibility, while the fiddle work of Brady Black keeps the music grounded in its Texas roots and a solid foot in the country realm. It’s hard to identify a “hit” on this record since half a dozen could easily qualify, and the coming years of vetting this material in concert might reveal that they all are. When your focus on radio is regional, and your fandom is as loyal as it is in the Texoma region, you don’t have to rely on someone else telling your fans what to listen to. They sing along to the whole album, and crave those deep album cuts when they get them in concert.

Hellbent opens with “Drinking Money,” which is just as much 90’s rock influenced as it is country. You can hear “Comal County Line” and “Fire in the Hole” being mammoth in concert. But if you dismiss Randy Rogers Band as just “bad rock with a fiddle” as Tom Petty once said about modern country music (Petty died during the first recording session for this album), you’re glossing over solid country gold songs like “I’ll Never Get Over You,” which gives the best of 80’s Alabama a run for its money. If the mournful fiddle at the end of the “Anchors Away” chorus doesn’t awaken the yearning in your country music heart, get yourself checked for atrial fibrillation. And “Wine in a Coffee Cup” has all the cool, 90’s styling of a Midland song, but is better-written, and more believable coming from Randy Rogers.

Yes, the songs of the Randy Rogers Band are more practical than poetic as a whole compared to country music’s critical favorites. Randy Rogers is not going to make a short list of this generation’s most naturally gifted singers, and any twang is balanced out by rock tones. But the music resonates with fans both young and old, and in the regular circuit the Randy Rogers Band plays, the band is just as big as many of the bands of the mainstream, while their fan base expands out across the United States in increasingly large pockets as listeners look for something better than what the mainstream is serving. There probably will be better records in 2019 when judged across the musical gradients critics like to harp on, but it will be hard to find another that’s as easily enjoyable to listen to cover to cover.