Album Review – The Revelers “At The End of the River”

Now this is what we’re talking about ladies and gentlemen. It’s been way too long since we had a proper Cajun album with enough country tie-in’s for honky tonkers to sink their teeth into and not feel traitorous towards to their stack of country records, and Lafayette, Louisiana’s Grammy-nominated The Revelers have just plopped a doozy of one in our laps called At The End of the River, or ‘Au Bout de la Rivière’ if you prefer the local vernacular. Get ready to bop your head and shuffle your feet, and not feel at all weird about it because this is not the next Gen Z viral hit launched via Tik-Tok, this is the real deal Cajun swamp stuff marinated in jerk sauce, blackened just right, and spread out for your inspection and partaking like a Creole feast.

Combining the best of authentic Cajun music, the top shelf sounds and influences of Zydeco, a zip of swamp pop to give it just enough of that early rock ‘n roll and rhythm and blues groove, and yes, a couple of traditional country numbers, The Revelers peg the mole square on the head in this one, providing a little something for everyone and a lot of something for anyone. It’s immediately familiar enough to pull you in with those fetching Cajun rhythms born from the squeeze of the box and the cut of the bow, but is just fey and regional enough to keep the experience deliciously spicy, while expanding your little musical comfort zone.

Having been around for almost 10 years now, The Revelers feel this is the record that hits at the sound they’ve been trying to attain since they started. Saxophonist Chris Miller is the primary arranger for the band, and brings an expertise with all those Cajun music disciplines to the table. Accordion player Blake Miller is known as one of the most revered and prolific writers of French Cajun music around. Guitarist Chas Justus helps bring the swamp pop sound to the table. Fiddler Daniel Coolik can slide right between both Cajun and dancehall traditions, which down in Louisiana are close to the same. Along with bass player Trey Boudreaux and drummer Glenn Fields, these guys prove that before you can take music like this where you want it to go, you first have to know where it’s been. The Revelers have this dialed in darn near perfectly. 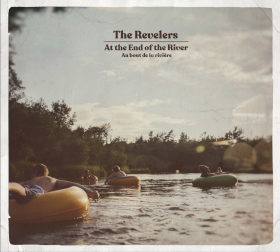 Of course Cajun and country have always been kissing cousins, but you can either listen to those sometimes lame “Cajun” tracks with overdubbed accordion on some Midwest band’s otherwise country record, or you can go directly to the source. Most all great roots music refuses to lose it’s regional perspective or dialect, or apologize for it. Singing half their songs in French means The Revelers aren’t fooling around or trying to find their niche in the commercial market. Keeping those regional influences lush and vibrant is the way the monogenre will ultimately be kept at bay. The Revelers are the perfect example of how you can preserve regional sounds, but you don’t have to inhibit creativity in the process, or forbid mixing together styles to make something new like they do so expertly on At The End of the River.

If you nodded off during French class in high school, you may find it hard to understand exactly what they’re singing about in songs like “Au bout de la rivière” or “Pendant, J’suis loin de toi (While I Am Far From You).” But you definitely feel them. Music is the universal language, and they make this patently clear on this record by instilling everything they sing and play with a passion for not just preserving these styles of music, but understanding the best way to keep them preserved is by making something universally enjoyable.

In anything, the two country-sounding songs on the record—“She’s a Woman” and “You’re Not To Blame”—might be two of the more mild tracks. The Revelers are incredible musicians and composers, but you don’t especially hear that “pain” or distinctive tone in their voices sometimes that you need for good traditional country music, and that’s lacking in some of the other songs on the record as well. But you appreciate them bringing in some steel guitar, or arranging the fiddle and even accordion parts to represent those honky tonk and dancehall influences that are an important part of the Southern Louisiana sound as well. And perhaps the country-sounding songs might be what some Cajun fans appreciate the most, giving them that little bit of twang they crave but don’t always get in their musical diet.

But this is Cajun music first and foremost, and kudos to The Revelers as champions of these sounds, and ones who give a road map of how to keep all of these critical traditions rolling down the line on At The End of the River.

Purchase from The Revealers

At The End of the River, Review, The Revelers