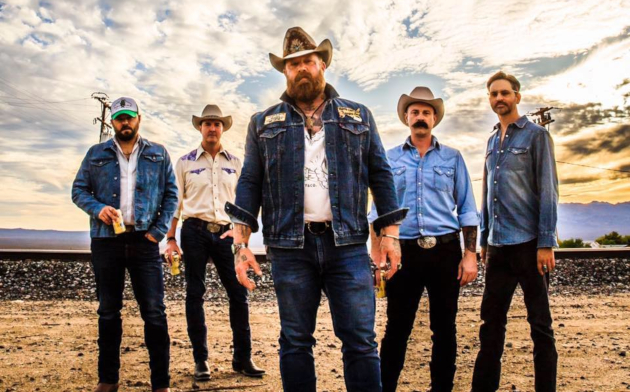 Breaking out of Las Vegas like a bunch of bad characters that just knocked over a bank and have an appointment to keep at a high desert cathouse, here comes The Rhyolite Sound roaring out of Southern Nevada, seasoned in the seedy lounges and casino bars of Sin City where it’s not just smoking that’s still allowed inside, soaked in the kerosene of countless nights playing 3-set gigs, and lit on fire from a high passion for authentic country music.

For those fans of folks like Whitey Morgan and Jackson Taylor who are tirelessly searching for that hard-twanging and boot stomping country music sound to bust through your high tolerance for honky tonk like 100 Proof, you’ve hit on the mother lode with Mojave Gold. Having spent countless hours entertaining folks often there more for the domestic well specials and quarter slots, they’ve become showmen of the highest order, and deadly tight in their delivery.

The Rhyolite Sound is not for the faint of heart. The bass drum is pounding, the amps are cranked, the train beat is rolling, and though they butt right up to Southern rock, they still remain decidedly country. Songs of bad decisions and desperation are what they’re all about. There’s no hiding what a song like “Margaritas and Cocaine” is conveying, while a song like “He Can Have Her” is as much of a heartbreaker as any.

Though no doubt what most punctuates the band’s sound is a hard country style indicative of modern Outlaw music steeped in classic country tradition—and the band looks the part as the kind of cats you’d want on your side in an alley brawl—there’s an emphasis to make sure The Rhyolite Sound is something you can’t just pigeon hole into the stereotypical “Outlaw” sound. Born from the band’s ability to cater a set of music to whatever crowd they find themselves playing in front of, they can roll off the edge a little bit and play country music that’s more traditional and classic as well. 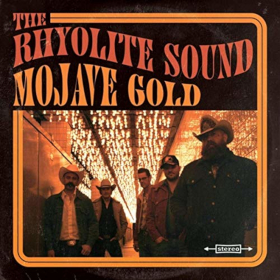 Larry Rhea is the big burly red-headed front man, and he’s the guy in the driver’s seat for many of the band’s hard-charging songs. But the heavily mustachioed Erik Alesi brings a bit less gruff, and a bit more substance to the band with the Southwester-flavored country song “There I Go,” and the honest and introspective “Ain’t No Outlaw.”

You may worry an act like this takes themselves too seriously, which is a symptom of some modern Outlaw country bands, but they can play a cover song like Mickey Newbury’s “Why You Been Gone So Long,” and leave the machismo behind to do the song justice. And what really surprises you as the album goes along is how funky some of the songs get. All the tones and textures on Mojave Gold are spot on, including the swanky guitar and keys parts, and the final song “I Think Too Much When I Drink Too Much” catches the band stretching their legs and showcasing their musicianship, which is great throughout the record. The songwriting isn’t always stellar, but the music most definitely is.

The Rhyolite Sound and Mojave Gold are wickedly entertaining. But some of the shifting of sounds found on this record may be jarring for some, and could leave you wondering, “What is the Rhyolite Sound?” Rhyolite is a type of volcanic rock similar to granite, and can be found around the Las Vegas area. There is also a town called Rhyolite that sits at the edge of the Mojave Desert north and west of Sin City. Forming the band in 2013, these boys are proud of where they’re from, and looking to put Southern Nevada on the country music map through this record.

It’s a bit curious why ol’ Sin City didn’t become more of a hot spot for country music aside from nostalgia shows in the corporate casinos, Tanya Tucker starting her career in nearby Henderson, and that Flying Burrito Brothers song. With its proximity to Bakersfield and its draw on Outlaws and bad characters, you would think it would have it own distinct scene. But it does boast its own distinct country band, and it’s hard, it’s heavy, it’s unapologetic, and it’s to be enjoyed by country audiences well beyond the Desert Southwest.