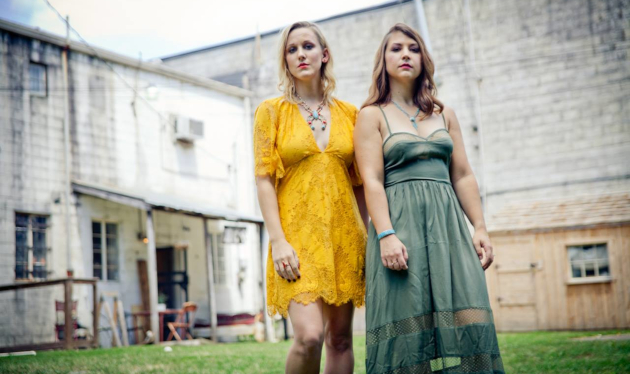 If you’re a closet fan of the kitschy country songs of Kacey Musgraves, or the unabashed attitude of Maddie & Tae, but just wish it could all be a little more country and organic, the Steel Blossoms have bloomed just for you. A cunning take on the classic country duo with songs that will make you laugh, make you cry, and make you think in a listening experience that covers a lot of ground, the two-part harmonies and harrowing tales of the Steel Blossoms are worth seeking out.

Sara Zebley and Hayley Prosser are two former elementary school teachers who met in Pennsylvania while playing in separate projects. Immediately noticing a musical kinship between each other, the Steel Blossoms were formed, eventually relocating to Nashville and spending ample time developing their songs and sound on the road and house concerts. Evoking the timeless sorcery of two-part harmonies is one thing. Penning songs that put this gift to good use is another. The Steel Blossoms possess both.

Their self-titled album released on Billy Jam Records gives you a lot to unpack in 10 songs, with a wild range of textures, styles, and subject matters broached. The Steel Blossoms rear back and swing for the fences with each song they compose. Whether they’re trying to be funny, heartfelt, or expressive, it’s all very rich, and very deliberate. There’s no diluting of subject matters or shades of subtlety here. They’re reaching right for the ventricles or funny bone and demanding you listen. Sometimes it’s effective. Sometimes it’s a little more elusive. But it’s always colorful and determined. 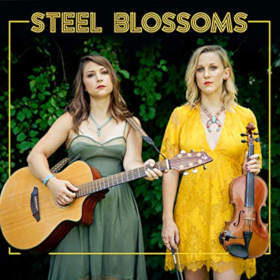 The opening song of the album “You’re The Reason I Drink” is a good test case for this band. It’s cheery-feeling song with a devilishly catchy, sugar-coated melody … that’s all about becoming an alcoholic at the hands of a bad lover. These sort of tongue-in-cheek, sardonic songs make up half the record, like the whimsical Musgraves-esque “Trailer Neighbor,” the pot and alcohol-abusing “Pick Me Up,” and the attitudinal “You Ain’t Sleeping Over” about withholding sex until a ring is produced.

But then bisecting these selections are songs that swing in a completely opposite direction. “Revenge” is a dark, incredibly well-written Gothic country fiddle dirge that would be perfect for your country Halloween playlist. “County Line” is thoughtful and wise, cuttingly true, and the kind of song you might hear from the saltiest of Americana’s songsmiths. “Kentucky’s Never Been This Far From Tennessee” is a no frills traditional country classic about missing your lover.

If nothing else, the Steel Blossoms keep things spicy, and demand the listener stay on their toes, because you never know what’s coming next, except you’re almost guaranteed it will be unexpected. But this is also one of the concerns about this self-titled album—that as a cohesive unit it’s frenetic, and suffers from a bit of an identity crisis. Most any song on the record isolated is enjoyable, with some fair to label as outright astounding. But the see-sawing of emotions makes it a little strange as a cover-to-cover listen, and doesn’t really give a solid answer about who or what the Steel Blossoms are aside from definitely talented, and definitely country.

An album that took the kitschy angle on country but perhaps is more serious for a few songs would be one thing, or an album that mostly focused on deeper, singer-songwriter material with some silly songs thrown in there for levity would be another. Smashing these two things together in equal portions, and purposely alternating tracks makes it difficult for the mind to settle in a groove.

The good news is there’s a lot of great songs here. Whatever your mood or sensibility, the Steel Blossoms have you covered, and show a pretty unbelievable range and proficiency with whatever they choose to pen and sing about. Putting your finger on exactly what the Steel Blossoms are may be a little tough, but concluding that they’re enjoyable, engaging, and intriguing is quite easy.

Purchase from the Steel Blossoms