Alaska via east Nashville is not a narrative you normally see play out in the itineraries of country records. But who would question whether the wilds of Alaska have enough wide open spaces, scenic vistas, or snarly honky tonks and hard times to inspire a good country song? Nobody would after listening to Todd Grebe & Cold Country’s new record Citizen.

I was first clued into Todd on a quaint little release called An East Nashville Christmas published back in 2012. I’d forgotten all about it until I heard Grebe’s “Let’s Make Love for Christmas” coming out of my speakers from this new release. Todd Grebe started his career in Alaska, moved down to Nashville for a while, released a record, and wound up right back from whence he came. That’s a pretty common story for the many who venture down to Music City, but starting it off in the wilds of Alaska is pretty unique. Similar to many authentic country artists from the Pacific Northwest, Grebe began in the bluegrass discipline before settling into honky tonk. That’s what imbues this music with such craftsmanship and authentic ties to the roots of the music. 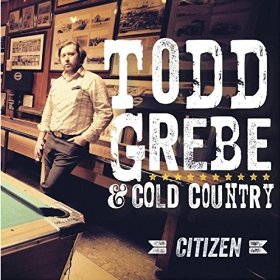 First and foremost Citizen is a classic honky tonk record. Fiddle, steel guitar, and that hardtack attitude woven between wooden walls of cabins and beer joints, crafted with calloused hands looking to wind down after hours of hard work and a years of heartache. Joining Todd in this endeavor is his “Cold Country” band who know how to put the Western back in country. Telecaster player Nathan May has that Bakersfield feel down pat, Todd’s wife Angela Oudean is his melody partner on fiddle, and Larry Atamanuik is the man on drums.

Citizen starts off with one of its strongest contributions called “Criminal Style.” You could hear this song coming from Hayes Carll, or New Orleans’ Royal Fingerbowl in the way the words sway and meander in a red-nosed saunter, and how it turns criminal affairs into a cause for romance. “Box of Wine” is also a big takeaway, and again humor is a huge factor in how the song reels you in. Todd wrote most every song on Citizen aside from a rendition of “Ain’t That Fine” made famous by Roger Miller—a man Grebe counts as a huge influence. Another of the album’s stellar tracks, and one of the more intimate and sweet moments of the album is called “Brown Hair” written by Travis Zuber.

Possibly the most well-written and worthwhile track on Citizen might be the final one called “You’ll Never Find Me.” It frames the current level of political discourse in America in such wise and telling manner, it should be required listening whether you’re a country music fan or not.

Also helping to make Citizen a fine and authentic effort is the fact that it was recorded by the legendary David Ferguson at his Butcher Shoppe recording studio in Nashville. Other notable credits go to Steve Hinson (George Jones) playing pedal steel guitar on many tracks, and Mike Bub, known for his work with Del McCoury, playing bass and co-producing the record.

Citizen reminds you that no matter what may be happening in the mainstream, in the far recesses and crevices of society, from the Florida Keys to the cold wilderness of Alaska, authentic country music is alive and well in the hearts of those who would never let it die, and would play it until 2 a.m. even if nobody was listening.