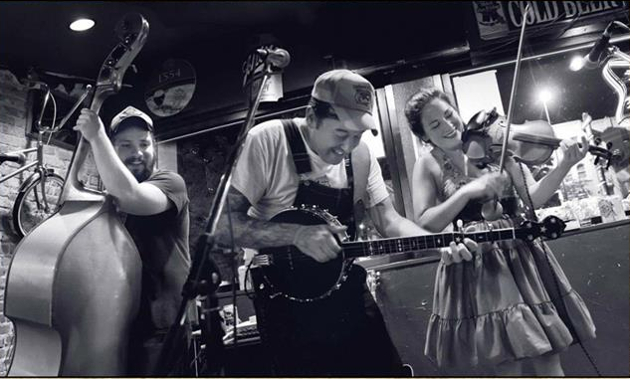 Banjo Player Jared McGovern, fiddler Liz Sloan, and upright bassist Martin Sargent make up the fun-loving, lighthearted, yet hard-charging string band trio the Urban Pioneers out of north Texas. First meeting as bandmates for the backing band of Bob Wayne, and later becoming a big part of Jayke Orvis’s Broken Band, Jared McGovern and Liz Sloan are underground roots music survivors and dedicated lifers if there ever were any, resigned happily to the road life in smelly vans and sleeping on couches with a smile and simple goals, and entertaining fans with a by-gone sense of earnest showmanship delivering an arm full of witty original songs.

Their new album Hillbilly Swing Music is true to the title, filled with fun ditties and infectious reels that reawaken the simple joy of primitive American string music in a way that is invigorating and fun, yet still enriching with intelligent turns and deceptively-smart songwriting. By leaving some of the pretentiousness and the genteel perfectitudes of much of modern string music behind, the Urban Pioneers are able to set themselves apart from the stuffy reenactments of the profession to make something that feels more authentic to the true traditions of back porch hillbilly bands.

The Urban Pioneers are something much more akin to the Foghorn Stringband or Old Crow Medicine Show as opposed to the precise modes of straightforward bluegrass, or the morose moods of dark Appalachian old time. This is music to get up and move around to as the album title implies. They create music that many people can enjoy, regardless of age. Play the Urban Pioneers for your grandparents and you’re liable to get a rise out of them. Small kids will prance around almost uncontrollably to the music, succumbing to the timeless appeal of authentic roots rhythms. Yet go to an Urban Pioneers show, and most of who you might see are punk rock coverts who are drawn to the Urban Pioneers approach from the attitude underpinning the music, the DIY spirit, and the adept technique at breakneck speed the trio is able to accomplish. 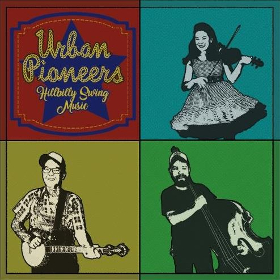 Their fourth overall record, Hillbilly Swing Music really is a step up in quality across the board from the trio, from the songwriting, to the production, to simply the audio grade of the recordings. It’s probably worthy of naming as their best record yet. The songwriting is more finely tuned, and they took the time to bring in steel guitar, a few horns on a few songs, some piano, and to utilize twin fiddle harmonies here and there to create diverse textures for these 13 songs to thrive in.

When you can play as fast as they can, it can get easy to fall back on sheer speed to entertain crowds. But songs like “Fast Money,” or even a simple one like “Kitty’s Favorite Day” show an understanding of how to use observation and insight in songwriting in a way that is accessible, and can turn even mundane subjects into entertaining poetry.

Jared McGovern and Liz Sloan don’t have conventionally perfect singing voices because they’re pickers first, and if you understand what the Urban Pioneers are all about, that isn’t what holds them back, it’s what makes them endearing. In the old times when country was a primitive art form, and opportunities to play were earned through hard work and the only resort for entertainment in rural regions. It wasn’t about being perfect, it was about having a good time, and finding fellowship through the shared joy of music. Though many other bands and artists get the musical modes right, the attitude is often too dark, and spoils the joy old time and primitive country can have.

A former classically trained violinist and an enlisted man in the Navy take time from trapping feral hogs on their property in North Texas to play a few songs for you to help spin the troubles away. This is what old time primitive country is all about.