Valerie June is the kind of cool everybody wants to be. She started out as roots music’s own little special creature with her primitive country Gospel soul songs—an unearthed gem of Americana made that much more cherished because it was a personal discovery way before the general population caught on. She was both unique and familiar, rootsy and fresh, and almost immediately destined to not be contained within a narrow collection of listeners “in the know” in American roots. It was too cool. The music, and just her image was exactly the type of hipness Coca-Cola and Calvin Klein underwear commercials crave. As has been the way for other independent artists, Valerie June got more exposure though a JCPenny spot and the Shazam app than she did mainstream radio. But she got it.

Now you see her all over the place. She’s gracing the cover of Spotify playlists and songwriter magazines. It’s incredible where you’ll see Valerie June’s visage show up. It’s because she looks cool with her gaggle of stylized dreadlocks and is a symbol of diversity. It’s the type of the diversity the hoity-toity upper crust music listener likes to assure themselves they’re into, even if they don’t particularly understand the music. With Dan Auerbach of The Black Keys producing her first record, Valerie June went from underground country Gospel roots to getting invites from every major festival in the country. It was almost enough to be off putting for the greasy independent-minded country fan if the music wasn’t so good.

By the time Valerie June’s second major release The Order of Time arrived, her mystique was preceding her. She made the perfect image to put as the avatar on your think piece about the type of diversity we need in the Trump era, assigning all sorts of assumed leanings to her and her music to get their point across, and glossing over the fact that she is still a very Southern, traditionally-raised artist from the cradle of the Mississippi river who is not particularly media savvy, or even politically active with her music. The first song off of The Order of Time starts, “Pile in the church pew rows. Grand makes the bestest rolls.” But she’s still cool. 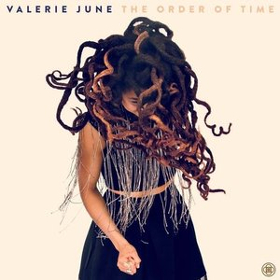 All this is said to illustrate the range of emotions and preordained ideas that come with cueing up The Order of Time and trying to listen to it just as music in the raw, and how Valerie June intended it. Four years between album releases is also an important distinction to help set the table. Valerie June’s image may be widely distributed, but her music remains very much a niche experience, regardless of how popular it has become. It’s kind of weird. Her voice is squeaky. The production is strange. It doesn’t really fit anywhere or follow any rules. Granted, you won’t find a shortage of artists claiming they don’t follow the rules, yet by trying to be weird they end up being more conformist than the mainstream. Valerie June is the type of weird that comes from totally trusting in oneself instead of trying to mask insecurities. And that’s what makes her cool.

The songs of The Order of Time are delicately crafted and incredibly deliberate. Though Valerie June’s music has been naturally slated into this whole soul roots revival thing that we’ve seen carried forth by folks like Leon Bridges, Anderson East, and even Sturgill Simpson, there’s a primitive country element here that goes overlooked and misunderstood. The almost monotone and stripped-down “Man Done Wrong” and the beginning whisper vocals on the autobiographical “Long Lonely Road” are not the type of thing the slick roots hipsters are likely to comprehend, at least at the beginning.

What Valerie June does is pull the essence out of a varied assemblage of American musical artforms to collaborate on her very heartfelt songs, while leaving many of the more overt identifiers of each of these genres on the sidelines. The Order of Time is tenderly simple in moments, and in others feels quite atmospheric and expansive, even if the music remains sparse. There are a few of those horn-blasting soul songs with hand claps, organ, and pounding drums indicative of today’s hip roots music, but they’re set up with the more intimate stuff as opposed to vice versa.

It’s easy to get overly excited, or unnecessarily put off by The Order of Time even before you begin listening. But no matter what your predisposition, with an open mind this album is a deep grower. Time reveals the beauty in the simple melodies and careful production, and the way the simple songs contrast with the more full arrangements, the rockers feel even more ballistic.

Valerie June is a niche performer who’s found a wider acceptance—the fate we pray will befall many of our favorite niche performers in hopes to improve music for the general population and not just ourselves. But unlike some of those niche performers, Valerie June was able to hold onto herself while finding a bigger audience. This means she will remain misunderstood by some, which might be a sign of quality in itself. But The Order of Time finds new ways to express old things, which is the hardest task for old music in the new era.

Purchase The Order of Time from Valerie June

Purchase The Order of Time from Amazon