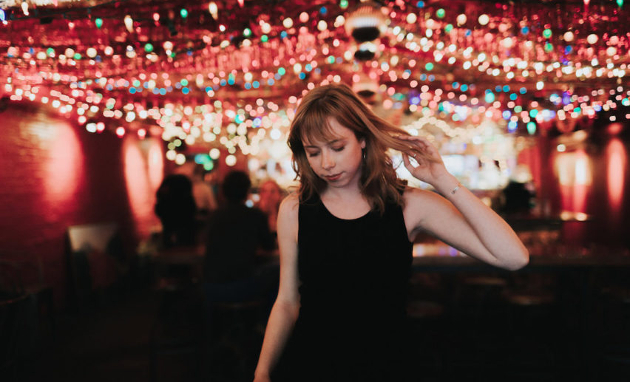 For some artists, the pursuit of country music is a passion they pick up at some point in young adulthood, perhaps as part of a high school band or a college side project. For others the country bug bites them at a much younger age and they begin the lifelong pursuit of learning an instrument and doodling with original songs. And for others, they are birthed right into the music to the point where an inexorable force to pursue and honor the tunes and modes of past generations courses through their veins and is irremovable by time, trend, or economic hardship. It is simply what they do, and who they are.

Vivian Leva from Lexington, Virginia falls into that latter category. She sings like she breathes, she performs like she moves a kettle from the stove to the table. Effortless, as they say. The music springs from her lungs and sparks from her fingertips as she sows original compositions from the inspirations she encountered from the earliest of ages because making traditional music is all she’s ever known.

Vivian Leva’s father James is a cherished multi-instrumentalist. Her mother Carol Elizabeth recorded with Hazel Dickens and Alice Gerrard. At the tender age of 9, Vivian Leva was already writing and performing original songs with her father in hallowed halls such as the Carter Family Fold. No rebellious bone ever acted up in Leva as adolescence set in. She embraced the heritage that surrounded her, and set to expanding the music’s legacy with her own original interpretations of timeless themes served upon ageless instrumentation.

Vivian Leva has been making waves locally and regionally for years at festivals such as Clifftop in West Virginia, becoming one of those artists birthed out of a community of pickers, singers, and players eager to shepherd emerging talent to the forefront, and carry the voice and sounds of Appalachian music to a new generation. Today, Vivian Leva can often be seen performing with Riley Calcagno of the Onlies, and the two have often collaborated together as a duo. 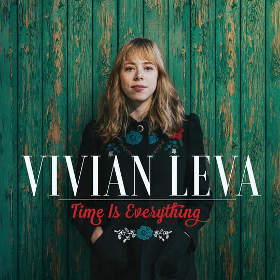 But Time Is Everything is about taking the attention and pointing it directly at Vivian, allowing the full breadth of her talents to be displayed for the world to behold and take measure of. Riley Calcagno still lends his excellent harmonies and playing to the effort, as do a select few others. But the focus is Leva’s flowering aptitudes and insights, and her eight original compositions that don’t just deliver a joyful and fulfilling listening experience in the here-and-now, but forebode of a formidable belly of talent that will be enriching the traditional American music space for years to come.

The style is mostly of traditional Appalachian music in the primitive country and mountain folk styles, including the albums two covers, “Cold Mountains” originally composed by Virginia’s Texas Gladden, with a new verse lent by Leva, as well as “Last Of My Kind” by Paul Birch. But there is also a bit of honky tonk here, like with the opening tune “Bottom Of The Glass,” and the instant classic feeling, “Why Don’t You Introduce Me As Your Darlin'”.

These are all excellent efforts, but when Vivian Leva really astounds is when she delves heroically into the inner depths of the human emotional experience to give music and rhyme to the pining heart. “Time Is Everything” holds such eternal truths, you can almost hear the cracking of the heart as two life paths slowly creep away from each other. The sorrow Leva evokes in the incredibly-written “Sturdy As The Land” is hard to keep your breath through. This album is full of songs reaching for love, often unrequited, yet still steeled with resolve and bound to honest feelings for someone else unrelenting.

It’s only fair to point out that the production of Time Is Everything is quite sparse, which at times is a grand asset, but other moments could have utilized a grander vision to bring such world-class compositions to their full potential. The album was produced by Leva herself, Riley Calcagno, and the engineer for the project, when perhaps more of a visionary could have taken this to the next level, like we saw with the debut of Dori Freeman, also released on Free Dirt Records. Vivian Leva is an excellent singer, but could have benefited from being challenged out of her comfort zone.

Yet Time Is Everything is also blessed as one of those efforts that just continues to grow on the listener more and more with subsequent listens, as the stories of the songs become more clear, and subtleties in the performances reveal themselves. That also means it’s dependent on the listener to give it a good, hearty consideration before making any ultimate conclusions.

Vivian Leva is still in college, and Time Is Everything should be considered as just the start of what could be a long and involved contribution to the traditional American songbook. But even at this early stage, it is so much more enchanting than many contemporary efforts or big budget affairs because it’s genuine, heartfelt, inspiring, and honest. Vivian Leva has an incredible capacity for stoking empathy in a listener, and putting songs to the emotions we’re all face and fear.

The love of country music, and the desire to perform it is not an uncommon affliction. But it is much more rare to see it manifest with such breathtaking results, endure through adolescence and the precocious nature of young performers as it did with Vivian Leva. Time Is Everything is a testament to perseverance, pedigree, the strength of community, and the resolve of timeless American music to endure, and the talents Vivian Leva looks to unfurl for our listening edification for years to come.

Purchase Time Is Everything from Free Dirt Record

Purchase Time Is Everything from Amazon