Despite the dissolution of The White Stripes and the Queen of Rockabilly cresting into her 70’s, this new album leaves little doubt that The Party Ain’t Over, and neither are the careers of Wanda Jackson and Jack White.

One thing is for sure, whatever criticism one can come up with for this album, it is difficult to say that it lacks vision, or scope, or that it needs fleshing out. With a full accoutrement of musicians, a horn section, pedal steel and keys, various vintage effects, Jack White’s heavy-handed blazing guitar, all captured on the warmth of 2-inch tape, there were few if any stones left unturned. Jack White, who produced this monster, pulled out all stops and compromised nothing.

The most remarkable thing about this album is the continued purity of Wanda Jackson’s voice. If you didn’t know Wanda Jackson from Adam, and the only clue to her identity was these recordings, you’d think she was sumptuous 20-something filly. The adorable, almost child-like quality to her voice has not weathered whatsoever despite being used as a weapon of rock & roll for over 50 years, and the rockabilly growl that adds a touch of devil to the angel voice is as raspy and enchanting as ever. 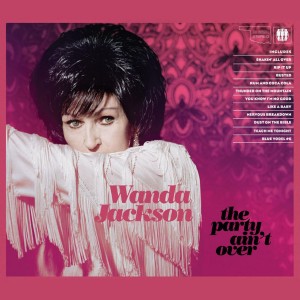 But Wanda’s voice seems like an afterthought sometimes to these heavy and loud compositions. The rockers of the album like “Shakin’ All Over” “Rip It Up” and “Thunder On The Mountain” come at you like a wall of sound, with very little to no space, and no elbow room between instruments or parts. Wanda gets buried as a horn section and Jack’s guitar vie for attention, and a muddy drum and bass duo walk all over each other. If you can zero in on any individual part, it is probably pretty damn good, but the band feels like it is playing at each other, instead of with each other.

There’s just a lot blurriness on this album, much of it in the bass and drums. I’m all for warmth and volume and a vintage feel, but the rhythm section seems to reverberate and clog up any breathing room in these songs, especially the more up-tempo ones. “Rum & Coca-Cola” is a fun song with some great arrangement and vision, but the vocal harmonics diminish the natural purity of Wanda’s voice. The wandering, swaying drunk of a tavern song called “Busted” works well until the horns and pedal steel come in all at once at the end of phrases, blasting your brain until your head feels like it’s been swaying in a pinball machine and you’re wrenching the wrong way on the volume knob.

However as the album goes on, the arrangements thin out a bit to let Wanda’s voice and inflections shine. The rockers on this album will get most of the attention, but “You Know That I’m No Good” was my fav, with Wanda commanding the mood of this sultry, seductive sonnet with her enchanting growls and coos. Generally speaking this album is more rockabilly than country, and maybe even more rock n’ roll than rockabilly, but the end track “Blue Yodel #6” adds that tie to the roots from whence this music came, and allows Wanda again to show off her audible acrobatics with clean, confident, and classic yodels.

I like this album, I do. It’s good to put on in the background of a party and let it play, and it has some favorable aesthetics. But I wish there was a little less Jack White production and guitar, and a little more Wanda. The way it is set up, Jack’s name deserves to be on the front cover just as much as Jackson’s. If this album was presented with both names on equal footing, I might judge it differently. As it sits right now, it seems more like Jack White using the medium of Wanda Jackson to play music through. It’s still some very good music, and I like Jack White, but let’s not forget who the star is supposed to be.

Preview Tracks and Purchase The Party Ain’t Over.