Since country music is an art form where pedigree is often much more important than a passing footnote, it feels like a requirement to lead off the discussion of Old Fort, North Carolina’s Yellow Feather with the forward notice that this band includes Casey Kristofferson, a.k.a the daughter of Kris Kristofferson and Rita Coolidge. But this is not why you will be most intrigued by this band, though it may be a reason you initially pay attention.

What will draw you towards Yellow Feather is the warm and clever songcraft and harmonies they sow in simple, yet involved stories that makes this one of those small, cut-and-pasted-together bands you love to root for. There is nothing extra special going on here. No soaring vocals from some our generation’s best crooners, no super-picking by an incredible assemblage if instrumental marvels. Not even the songwriting specific to its adeptness at turning a phrase or rhyming words is something that by conventional measurements would be anything to wow you.

But what Yellow Feather possess that so many other bands with all of those other positive attributes fail to embody is a chemistry, an honesty, and an unpretentious and warm vibe that is hard to not find endearing, allowing the music to create its own appetite in your heart until you find yourself falling in love with it. Outfits like The Deslondes, The Alabama Shakes, and Shovels & Rope have it—that indefinable magic that makes them better than the sum of their parts. And so does Yellow Feather, famous daughter or not. 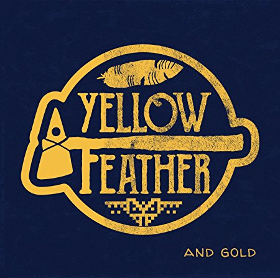 And Gold is the band’s debut album recorded at Echo Mountain Studios in Asheville, NC, just west of Old Fort. Along with Casey Kristofferson on harmonies, it includes primary singer and guitar player Hunter Begley, who really makes up the face of the band. Also along for the ride is slide player Charles Willis, and Rob Parks on bass. Others who make appearances on the record include Aaron Lee Tasjan on guitar, fiddler Lyndsay Pruitt of the Jon Stickley Trio, and Jimmy Rowland on keys. All together they charge forward mostly in time, usually in tune, and taking you on both silly and meaningful journeys into the head space of modern reality lost in a sea of thoughts, guilts, and selfish intentions amid a backdrop of smokey mountains.

From the very first song “If You Ain’t Cheatin’,” Yellow Feather puts you on alert that this is a band willing to delve into the underbelly of life, and not mince their words while doing it. They don’t just cry about being cheated on and used, they sing from the perspective of the cheater, and the user, and darn near make you empathize with them. Even some of the love songs are less romantic sonnets, and more pining odes to selfish needs, yet they work well since the words are more steeped in reality, and still cause the re-evaluation of one’s self like all good songwriting.

Casey Kristofferson is probably best at singing harmony, though this shouldn’t be taken as a backhanded compliment. Let’s face it, pops didn’t make his way in music because of his pipes. He did it because of the songwriting, and so will Yellow Feather. Somewhat curious about this band, and maybe even a little bit endearing is the fact that they seem to be completely passed over in any national recognition and narrative, even with a famous last name in the lineup. Barely anybody knows about And Gold released in November 2017, which makes them a good musical discovery.

Delightfully sloppy and disconnected, good to listen to during a drunk or hangover, and hard not to love, And Gold and Yellow Feather are a good little regional project that should be drawing ears from across a wider cross section of the country and roots world, and very well may if they can keep what’s cool at the heart of this music in tact, which is a dirty, earnest, and honest approach unbeknownst to trends.