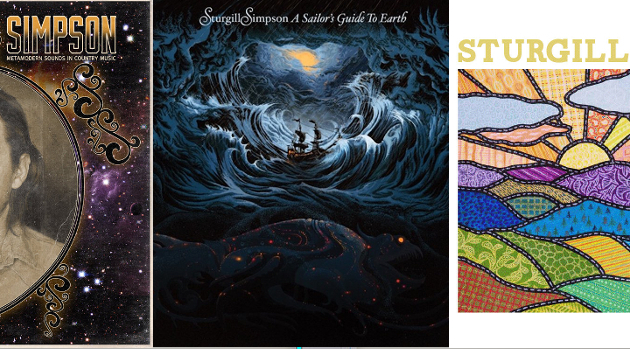 As to be expected, Sturgill Simpson saw a big sales surge after Sunday night’s Grammy Awards where he performed the song “All Around You” from his Album of the Year-nominated effort A Sailor’s Guide to Earth. The record also won the Grammy for Best Country Album earlier in the day. Though the surge would have likely been greater if Sturgill was able to accept the Best Country Album award during the primetime telecast (it was moved last minute), he still saw a big spike in sales.

After Sturgill’s performance of “All Around You,” sales of the song spiked 9,772% compared to the previous day, but that’s a little misleading since sales on the previous day were basically nothing, and the song still only sold just over 2,000 new downloaded copies total. Just like we saw with the sales spike for Sturgill after he performed on Saturday Night Live, the real ground gained was in album sales.

After the 2017 Grammy Awards, Simpson’s A Sailor’s Guide to Earth rocketed to the top of the iTunes charts, landing at #1 in country, and #7 overall. And that wasn’t the only album that saw a sales spike. Sturgill’s sophomore release Metmodern Sounds in Country Music also shot into the Top 10, landing at #8, while his first album High Top Mountain came in at #12. Even more surprising, as of Wednesday morning, all three records held those same positions three days after the awards. A Sailor’s Guide to Earth still tops the iTunes country chart.

What’s also a bit surprising is how the country music industry seems to be ignoring the surge, while talking about the surge for other artists. Perhaps it’s because Simpson’s particular imprint of Atlantic Records is based in New York and not on Music Row, but one of the industry-leading country periodicals Music Row Magazine published a story about the post-Grammy sales surge for country artists, including Maren Morris, Keith Urban, Carrie Underwood, and Lori McKenna, and specifically used iTunes data to determine the surge, yet didn’t mention Sturgill Simpson at all, even though he was leading the iTunes Country Album chart at the time.

Music Row Magazine even mentioned the sales spike of other non genre acts such as Ed Sheeran, Bruno Mars, and Katy Perry. Also curiously absent from covering the Sturgill Simpson surge is HITS Daily Double‘s building weekly albums chart. This is the source for the industry to see how albums are fairing before the official weekly charts come out. Similar to when they ignored Sturgill’s Saturday Night Live surge, there’s no mention of A Sailor’s Guide to Earth. After SNL, A Sailor’s Guide landed at #3 on the Billboard Country Albums chart, and Metamodern Sounds also re-entered the chart. A Sailor’s Guide could hit #1 next week due to Simpson’s Grammy surge.

Other country artists who saw a post-Grammy sales surge include Maren Morris, who landed at #2 in country on iTunes and #8 overall just behind Sturgill with her album Hero, Lori McKenna’s solo album The Bird & The Rifle rose to #22 after her win for Best Country Song with “Humble and Kind,” and Keith Urban’s “The Fighter” featuring Carrie Underwood sailed to #6 in iTunes song sales after their Grammy performance. Kelsea Ballerini also saw a sales spike for her song “Peter Pan.”