American Idol’s “Wolf” Hamlin Is Back on the Front Porch 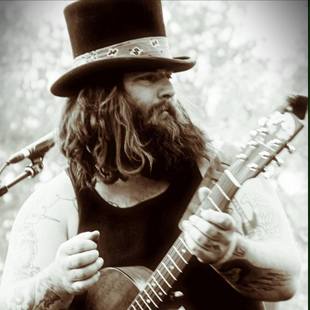 No this is not one of these American Idol alums who made it into the Top 20 of the show and tries to do everything they can to hold on to that glimmer of notoriety in an ill-fated attempt at a mainstream music career, this is Jason “Wolf” Hamlin who had the minds of many independent music fans reeling at the possibility of a genuine country roots artist making a real splash on America’s premier singing competition.

Of course Hamlin was a little too hard-edged to get very far on the show, but during the preliminary tryout phase of the 2012 season, American Idol selected him out of the crowd to be showcased in one of their extended segments on contestants. The 24-year-old engine mechanic carrying a “guit-fiddle” handmade by his recently-deceased father had a story, a look, and a voice that resonated with a crowd that was quite counter-intuitive to the American Idol audience. Wolf was singing Johnny Cash covers and showing a lot of attitude behind his music, despite maybe the Idol producers pushing the “Wolf” thing a little too hard.

“I hadn’t even planned on auditioning until I found out my wife was headed to San Diego a couple weeks before the auditions took place,” Wolf Hamlin explains. “I was told they were gonna be holding them there and figured, ‘Why not?’ It was never a make or break thing for me. People were able to see my father’s guitar and I was able to kickstart a career … People think either you’re a sell out or the next best thing when you go on American Idol. You realize that the level of vocalists and musicians is far beyond what is actually portrayed on the show. The competition out there is amazing.”

Hamlin got axed during Hollywood week and headed back home to Livermore, CA to start right back right where he left off, but with a renewed energy to pursue music further. “I came home with an all new outlook on music and what I wanted from it. I play with my band and other local musicians on a regular basis. I still work a full time job as a mechanic and last September married the woman of my dreams.”

In old-school back porch country music fashion, Jason Hamlin gathered together musicians from the surrounding area, his wife picked up the fiddle, and Wolf Hamlin became “Wolf Hamlin and the Front Porch Drifters.” Wolf says he loves his band. “I can’t thank them enough for what they do. It shows each and every time they get off work at 5pm, travel 2 to 3 hours to a gig, play ’till 2 AM, and drive 2 to 3 hours home.”

On July 30th, the band released their first, self-titled album independently. “The album is as real as possible. By that I mean it was recorded live In 48 tiring hours. We rehearsed for months, wrote a million songs, then hit the studio.” It’s a rough-hewn, raucous affair with its fair share of subdued songwriting moments, and some of the studio banter left on the tracks and a Southern rock flavor in stretches. 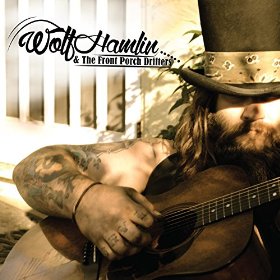 “It was a Friday night in February,” Wolf recalls. “We started at 4 PM and had booked the studio for the weekend. We a sat in separate rooms with our instruments and head phones and just pounded it out take after take ’till we got it right. Our theory was we wanted an album that was authentically us. If you see us play, this is what we sound like. No bells and whistles, no Auto-Tune, just good old fashion music being recorded.”

“In the song ‘Wolf Hotel’ at the end you will hear our drummer hold the beat a second to long and screams ‘Fuck!’ We left it in because it was a real emotion. We had done numerous takes on that song and changed a few progressions throughout the takes. It was 2 AM and we were all spent. He captured what everyone was feeling. That’s the side of musicianship we want people to see … I label it Outlaw country cause that my favorite type of music. I am frequently told that it has a Southern rock sound and I love that also. I grew up listening to John Prine, John Hartford, the Stones, you name it. I am particularly fond of the songwriting portion.”

The ironic part of Wolf Hamlin’s American Idol experience is it seemed to reinforce in him the most important part of music and the foundation for country music specifically, which is sharing music with friends, loved ones, and each other on back porches and in local watering holes. Not every musician can be in the national spotlight. “Life has been great, we travel and enjoy the the little things like a front porch jam with complete strangers.”

But Wolf Hamlin would love to have the opportunity to share his music with more people. “[I’d love to] play with my band everywhere we can. Sell records. Tour!  Hell I’m not sure but as long as we can keep creating and bringing those creations to people I’m good with it.”

And no matter what happens with Wolf, his father’s handmade guitar will be right beside him. “When I write a song it’s me and my father’s Acoustic. From there I bring it to the band and that’s when the Magic happens … I will always play my Fathers guit-fiddle. It’s part of me!”