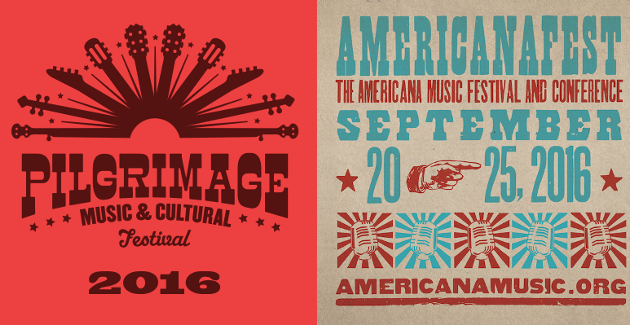 The reigning king of Americana music at the moment is arguably songwriter and performer Jason Isbell. But Jason Isbell will not be performing at Americana’s annual premier event every year—The Americana Music Conference, or AmericanaFest, that transpires September 20th through 25th in downtown Nashville. Isbell will be at the awards show that happens on that Wednesday to open the festivities, but he will not be performing at the festival proper. Neither will other mainstay Americana artists like the current upsurging traditional country artist Margo Price, or Austin, TX’s Shaky Graves who performed on the awards last year, or regular Avett Brothers collaborator Langhorne Slim, or Dave Cobb’s pet project and current Miranda Lambert beau Anderson East.

Instead, these acts will be performing at another festival in the town of Franklin, some 20 miles south of downtown Nashville, and ironically, right across the street from where the Americana Music Association’s headquarters are located, and on the same plot of land Americana attempted to launch its own dedicated outdoor music festival a few years ago.

It’s called Pilgrimage Festival, and they have decided that in 2016, they’re going to put their festival on the same weekend as AmericanaFest, and include many of the same artists that would regularly be invited and featured at the 17-year-old Americana event 20 miles up the road. Pilgrimage Festival is not exclusively Americana though, or even exclusively roots. You may remember when they made headlines in 2015 when they decided to add Steven Tyler to the lineup last minute, and initial reports characterized that Tyler had bumped Willie Nelson out of the headliner spot for the festival (later they either rectified, or clarified that public relations snafu). Pilgrimage also has bands like Beck, Cake, and The Violent Femmes playing in 2016. That’s not exactly Americana music fare, though it’s not too far off, and the same could be said for many of the bands and artists in Pilgrimage’s undercard.

Granted, none of this has appeared to put a significant dent in AmericanaFest’s ability to book talent. Their roster now has swelled to some 200 names, including big headliners like Dwight Yoakam and The Lumineers, and George Strait will make an appearance on the awards. AmericanaFest is doing just fine as far as finding performers for their event, and so is Pilgrimage who boasts an incredible lineup themselves, despite an exclusive radius clause keeping certain artists from playing both events. It’s the fans who may feel like their getting caught in the crossfire, and having to choose which direction to point their noses come the 3rd week of September.

If you’re a fan of Americana, you’re likely a fan of Jason Isbell. And you very well might be a fan of folks like Shakey Graves and Margo Price. Yet do you spend your money on the outdoor-style Pilgrimage experience, or do you pony up for the more conference-style experience of Americana? Or do you try to do both, potentially blowing your budget all out of proportion, especially if you’re from out-of-town?

The big question here is if the Americana community is large enough to support two major events on the same weekend so close to each other, or if the Americana public is being parsed too thin, especially in an environment of contraction in music festivals in middle Tennessee.

Bonnaroo and country music’s CMA Fest have occurred on the same weekend multiple times over the past few years, though they’re not really aiming for the same demographic, and they’re farther than 20 miles apart. Nonetheless, the festival world was shocked when The Tennessean revealed that attendance at Bonnaroo in 2016 fell by an incredible 28,000 people year over year. Another roots festival in the region, the inaugural Ink-N-Iron Fest in Nashville, canceled after one year, and after headliner Merle Haggard refused to take the stage. The parent company has since folded.

Concerns about a glut in the festival space in middle Tennessee is the very specific reason Americana decided to discontinue its own outdoor event called the Cross County Lines Americana Festival in May of 2015. “The festival marketplace has grown significantly in the Middle Tennessee region just in the past year,” said Jed Hilly, executive director of the Americana Music Association in a statement in May 2015. “As a not-for-profit trade association, we are in the business of fostering growth for all those who work in the Americana Music community and not to compete with them.”

Where Americana left, the Pilgrimage Festival moved in, putting their event at the same location—The Park at Harlinsdale Farm in Franklin, which is right across the street from the Americana Music Association offices. But the first year of Pilgrimage didn’t compete with Americana Fest directly; it was held the weekend after. So why move it to the same exact week of the more-established, and long-running Americana Fest now? How does that make sense for either party?

Then on August 23rd, Pilgrimage Fest released a bombshell. Already partially owned by Better Than Ezra member Kevin Griffin—who is also a Nashville songwriter and member of the supergroup Uncle Ezra Ray—Pilgrimage has now announced a new partner in superstar and new middle Tennessee resident Justin Timberlake. This adds an entirely new wrinkle to the Pilgrimage/AmericanaFest dynamic.

Pilgrimage has already announced that Timberlake will not be performing this year. And he may never perform at the fest. That’s not the point. Along with being a public relations boon for this year’s fest through the announcement, Timberlake’s involvement in the future means a new, deep-pocketed underwriter for the fest moving forward. Timberlake has also been named as a producer of the event. Meanwhile Americana, which only boasts a handful of full-time employees and prides itself in trying to grow things in a sustainable manner so as not to fall into the same rat race mentality of Music Row, is left with a growing juggernaut on its Southern flank.

Aubrey Preston, a name some may recognize for coming in to help save Historic Studio ‘A’ last minute, has funded and underwritten his own Americana projects in the past, including the Americana Music Triangle—a cultural tourist corridor looking to preserve and promote the roots and birthplaces of American music across a five state region which launched in May of 2015. Preston partnered with the Americana Music Association for the project, as well as with Americana’s Cross County Lines festival in 2014 when it was extended into a 10-day event called the Americana Experience, coordinating performances in many of Franklin’s venues and restaurants.

Preston does other work as a booster in the region, and helped preserve the Franklin Theatre.

“I couldn’t be more excited about becoming part of the Pilgrimage Music & Culture Festival,” Justin Timberlake said in a statement. “Being a Tennessee native and now a member of the community in Franklin, I have been watching the development of the festival over the past two years. For me, this is an amazing opportunity to help build an exceptional event and contribute to my community.”

What does this all mean for Americana and it’s artists and fans? Hopefully the subgene can continue to grow to the extent that both events can continue to thrive. It seems against the spirit of Americana to pit one event against the other, either from a fan or organizational standpoint. But when you have two events on the same weekend, or even on subsequent weekends, that ultimately may be the result.

As has been highlighted often over the last year, the festival landscape continues to become more crowded, and sometimes competing festivals in close proximity can cancel each other out. As Saving Country Music pointed out in February, along with other major festival cancellations around the country, the Big Barrel Fest in Dover, Delaware promoted by AEG, and the Delaware Junction festival in Harrington promoted by Live Nation, both were canceled after competing with each other over the same region. Not only do these festivals end up competing for many of the same fans, they also end up getting into bidding wars over the same roster of artists, making the price of talent more expensive for both parties, while radius clauses make it difficult for certain artists to participate in both events.

Saving Country Music attempted to interview a representative from Pilgrimage Fest, but was unable to connect. However, Kevin Griffin from Better Than Ezra and Pilgrimage Fest said in a statement to SCM, “We love the AmericanaFest and that it coincides leading up to Pilgrimage. It is a great time for music fans to be in Middle Tennessee and experience all that we both have to offer.”

Kevin Griffin was also recently interviewed by Forbes, where he explained the challenges of throwing a fledgling festival.

“Doing a festival is not for the faint of heart,” Griffin says. “When you get into any new business endeavor you quickly hear about different models that are put in your face. And the model that you see a lot of times with the festivals is first year you’re gonna lose your ass, second year you might break even and third year is the windfall where you actually start making money. First year we did lose money and that was in our business plan … We were able to anticipate shortfalls and how do we overcome them. I’d say after doing the post mortem on year one and you’re finding money and paying your bills, to be able to get through year one and service the debt, which was a lot, was a great accomplishment.”

Jed Hilly, the executive director of the Americana Music Association tells Saving Country Music, “I attended Pilgrimage last year with my mom. It’s at the same farm we did our Americana Cross County Lines day-fest a couple years back; have you been there? Its gorgeous! The Pilgrimage team appear to be building something different, with Beck and Better Than Ezra, its more of a pop-rock multi genre festival … and with more diversity of music in the middle Tennessee area there are more opportunities for all artists, and that’s great!”

However by booking Jason Isbell, Margo Price, and others, Pilgrimage is clearly broadcasting their intent of including big Americana acts in their lineup that will be restricted from playing AmericanaFest due to radius clause terms in performance contracts.

Jed Hilly goes on to explain that AmericanaFest is more than just a festival. “[It] is our annual fundraiser to shore up our artist advocacy initiatives year round,” he explains. “It’s a distinctly rootsier community event and still after 15 years, remains one of the more intimate and cool boutique festivals going. In some ways it’s to music what Sundance is to film … and we do highly recommend that fans pick up a wristband for our fest, and/or if you’re in the music biz, our conference is a must attend community/education event!”

Others have pointed out that it does help that Pilgrimage wraps up in the early evenings due to Franklin’s noise ordinances, giving attendees the opportunity to attend later AmericanaFest events, if they’re willing to pony up for tickets to both.

Americana is hot right now, and with the general rise in the prominence and commercial viability of independent roots music, a bit more infrastructure might be called for. Recently Billboard added a new Americana chart to its roster—symbolizing the rising importance of the distinction. And a new 100,000-watt radio station beaming out of MTSU will also give Americana a bigger footprint in the region.

But with the recent stumbles by Bonnaroo, Ink-n-Iron, and scores of other festivals across the United States that have either canceled or significantly downsized in the last year, there should be some concern about the two festival transpiring on the same week, while fans who want to see artists like Jason Isbell and Margo Price, but also want to see all the other names Americana has to offer, feel like they’re getting pulled in two different directions.