Americana Review – AHI’s “In Our Time”

AHI’s In Our Time is the album you never knew you wanted, but once you listen, you feel you absolutely needed. The underlying messages of uplifting perseverance, the poetry set in fiercely personal narratives, and a genuine soulful voice and perspective is all so powerfully compelling, it makes you want to meet this guy and become his best friend and patron. Aptly named, it’s an album for right here, and right now.

Music has always been a reflection of the culture of its time, and the culture of today is too often one of spending lopsided amounts of our attention blaming other sides for life’s inherent struggles, back biting people who don’t hold the same belief systems as our own, and building up animosities that often excuse one’s own personal behaviors or shortcomings for unfulfilled dreams. Sure, music is an important pressure valve for frustrations on either the personal or global level, and a viable platform for speaking out on social concerns. Most certainly adversity is never in short supply as inspiration for songs either. But solely focusing on the negative overlooks music’s powerful ability to inspire and instill the spirit with a vitality to overcome whatever issues life may send—self-imposed, or born of the ills of society.

In Our Time fasts forward past all the bad stuff, and immediately gets to the part where belief in one’s self and perseverance results in achievement and fulfillment, giving rise to not just great music, but wisdom, and a boost to the spirit. Despite all the odds, you can still find success if you have the talent for whatever you’re striving for, and the fortitude to see it through in the face of adversity if you trust in yourself more than the naysayers and negative thinkers. Often if you’re on the right path, it’s like the riches of the earth open up to you, while adversity is often the imposition of those who’ve strayed from their true purpose. 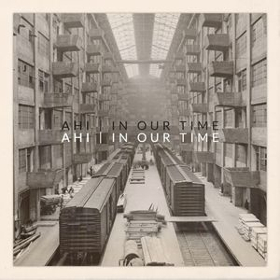 AHI can write and sing about all of this because he’s lived the story himself, and In Our Time is a direct reflection of that experience. A former vagabond and struggling songwriter trying to support a family of four, he was signed by Thirty Tigers to release In Our Time, and the first few songs on the Nashville-recorded album feel like accounts of where he’s at in this very moment, finally receiving his big break after years of dedication and belief.

AHI (pronounced like ‘eye’) is an interesting specimen for sure. As a Canadian making Americana music while wearing an equestrian helmet he received in the mail after he thought he’d ordered a cowboy hat, he may not be exactly what you expect to run into at somewhere like Saving Country Music or anywhere else specifically. The riding helmet has since become one of his signatures, and certainly underscores that he’s not exactly the typical stereotype in form or fashion. But AHI finds a wide and diverse audience through the universal appeal of his music.

If you approach this as country music record you will be disappointed. In Our Time is rootsy for sure, and Americana is probably the best bin for it at the record store. Think of Langhorne Slim, and maybe a little bit of The Lumineers, but with a much more soulful voice, and expressions about the human spirit usually reserved for Gospel or maybe reggae.

If anything, it’s the approach of some of the music and structures of In Our Time that stifle the effort, often relying too much on ‘Oh’s’ and ‘Ah’s’ and not really establishing any signature sound for AHI himself beyond the songs themselves. He can absolutely enrapture you simply with a guitar and a song from the magnanimous spirit he emits and the stories he tells, which in the 2nd half of the album turn very personal about his mother, his father, and his wife. People who have seen AHI live will attest to this. But in segments, the music of In Our Time feels like stock Americana from half a dozen years ago.

Yet if you have an open heart, it’s hard to not overlook whatever predisposed obstacles may keep you from enjoying AHI. It’s also hard not to open your heart to AHI because his messages feel incredibly fresh and welcoming to the ears in such dour times, even though the themes are eternal, almost to the point of turning trite if he didn’t deliver them so soulfully and poetically, and if they weren’t so prescient and forgotten in the present tense.

Music can be utilized for many purposes, and they’re not always positive, even if the songs come across as amiable. But from symphonic movements, to Gospel spirituals, to traditional folk ballads that canonize the common man, few things can truly inspire the human spirit like the right song at the right time. AHI understand how to tap into those channels of inspiration, and not just evidenced from the way his music moves you, but in how his own story and experience is a living example of how the perseverance and belief in one’s self he preaches about can ultimately pay off in fulfilled dreams.

Purchase In Our Time from AHI

Purchase In Our Time from Amazon

AHI, In Our Time, Review