Once again artists and fans will come from around the country and world to congregate in Nashville for AmericanaFest this September. Part industry conference, part fan festival, it combines scores of venues across Nashville for hundreds of performances and showcases. The 19th Annual festival will include some 250 total performers by the time everything is settled, and span six total days from September 11th to the 16th. From country and bluegrass, to folk, blues, roots rock, and everything in between, from up-and-comers to legends, new venues to historic spots, AmericanaFest will cover it all.

The Americana Music Association has just announced the initial 74 artists it has selected to perform at the 2018 fest. The lineup includes country legends like Lee Ann Womack and the Nitty Gritty Dirt Band, bluegrass stalwarts like Jerry Douglas and The Earls of Leicester, contemporary performers such as Brandy Clark and American Aquarium, and up-and-comers like the surging The War & Treaty, and Saving Country Music Album of the Year nominee, Jaime Wyatt.

Many more names will be coming in the months ahead, as well as information and nominees for the events crown jewel, the Americana Music Awards held on Wednesday of the event at the Mother Church of Country Music, the Ryman Auditorium.

Remember, the names below will more than triple once all is said and done. Wristbands that get you into most all AmericanaFest performance go for only $75 and can be purchased here. 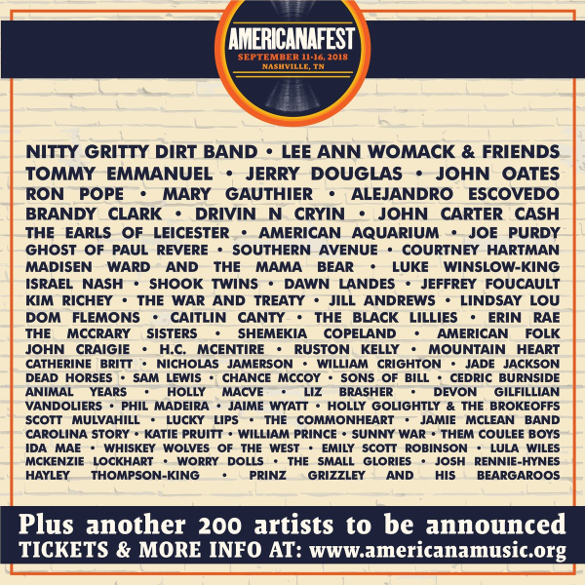