Amidst Turmoil and a Short Turnaround, Stoney LaRue Readies the Release of “Us Time” 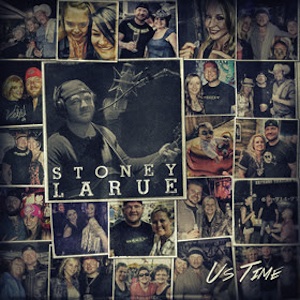 When I first heard that Stoney LaRue was releasing a new record, I thought the timing couldn’t be worse. After putting together a decade-long career of releasing records every other year or so, now he decides to release a new album less than a year after his latest record Aviator, and while the headlines about domestic abuse charges are still fresh in people’s minds. Even with a month off after the incident to press the restart button on his personal life, why not let a little more distance grow between the recent events and his last record before asking the still jilted public for a second chance?

But now that the details for the new album entitled Us Time have been revealed, releasing the album may be about the best thing Stoney could do to get fans, the public, and himself to focus back on the music, blow some steam out, and hopefully get a career and a life that before the recent legal problems was considered by many to be commendable, back on track.

Us Time is not your typical studio release. It is an album of mostly covers assembled through requests Stoney made from his fan base to suggest songs for him to cut in the studio, along with some of Stoney’s fan favorites never released in studio form. The 11 songs on Us Time include Gary Stewart’s “Empty Glass,” Van Morrison’s “Into The Mystic,” Glen Campbell’s “Wichita Lineman,” as well as notable Stoney tracks like “Oklahoma Breakdown,” and “Feet Don’t Touch The Ground.” Though fans may be used to hearing these songs live or on LaRue’s Live at Billy Bob’s record, a studio version has never been released. The album also includes a new LaRue song called “Easy She Comes,” and many pictures of Stoney hanging out with fans.

As the title implies, this is a record for the core fandom of LaRue. It’s not exactly a covers album, but it’s not exactly a big original, once-every-two-years release. Whether it was meant to come out now at this time, or was expedited because of recent events, Stoney is doing his best to turn the focal point back to the music, not just as a PR move, but for himself and his fans.

“I am excited, honored, blessed and extremely elated that I get this opportunity to work with the people I do and that the fans gave me their ideas on what they wanted to see from me on this record. It is their record and I am honored to be the voice,” says Stoney. “There is so much that went into this project and I am very proud of it. I mean, how often do you also get to have your fans on the cover of your project! That is very special and means a lot to me.”

Domestic abuse will never be forgivable for some. And for other Red Dirt and Texas country fans, it may take more than a new album to mend fences. But Stoney wants fans to know he’s trying.

“I am ready to get back to what I love to do, performing for all my loyal and supportive fans,” Stoney said in a recent statement. “I have felt the love from so many while I took this much-needed hiatus to re-center myself over the past month or so. This journey has taught me a lot about myself, and for this, I am very thankful. I also wanted to apologize for the canceled shows, but I assure you that you are going to see the best me possible. I am honored to have your support during this very important time in my life. I have learned a ton and now ready to do what I do love to do. Play music for my fans. I look forward to seeing you all as we head back out on the road in September. I truly appreciate all your concerns and encouragement during this chapter in my life.”

**Pre-Order Us Time through Amazon