Ashley McBryde is resetting what we’ve come to expect from mainstream country performers, mainly bringing grit, guts, tattoos, honesty, and plenty of rock attitude to her roosty sound that has made her a favorite of many fans and critics, and had her waking away with the CMA for Best New Artist back in November.

She’s also up for two Grammy Awards for her song “Girl Goin’ Nowhere” come January 26th from her first record of the same name, but she’s already prepping for her second installment to be called Never Will out April 3rd via Warner Music Nashville. Produced by Jay Joyce just like her first record, and featuring 11 songs with nine co-penned by McBryde herself, it already promises to bring plenty of blood and drama if the first couple of songs released are any indication.

“The significance behind the album title comes from the lyrics in the title track: ‘I Didn’t, I Don’t and I Never Will,’” McBryde says, playing off the same underdog irony that made “Girl Goin’ Nowhere” so resonant. “Before we recorded it with Jay [Joyce] in the studio, I said to my bandmates, ‘If we’re going to cut this and put it on the record, you’re promising anyone who ever listens to our music, we don’t listen to the noise in the background. We didn’t, we don’t and we never will. Don’t cut it unless you’re willing to promise it.’ And we cut it right then.”

We haven’t got to hear the title track yet, but we have heard the heartbreaking “One Night Standards” McBryde released back in late August, and she recently released a new song and video called “Martha Divine” (listen below). The Jay Joyce rock production is pretty palpable at first, but the twang kicks in during the chorus, and reveals a pretty sinister murder ballad. 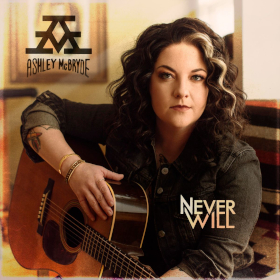 Ashley McBryde said to her co-writer Jeremy Spillman, “I told him I wanted to write something dark and we created this story that surrounds the most delightful trollop of a human being and gets down underneath the fingernails of the uncomfortable truth about family dynamics.” If nothing else, Martha Divine accomplishes this.

Ashley McBryde continues to struggle at radio, with “One Night Standards” stalling at #40 now after numerous pushes. But she continues to receive the right kind of attention from critics and awards institutions and a growing base of grassroots fans. She’s also been appearing on TV lately, including an appearance on The Tonight Show with Jimmy Fallon on Friday (1-17) night.

Never Will is now available for pre-order.