As the Music Row manufacturing line continues to churn out cute little pop starlets in their floppy hats and chemical tans, bearing their midriffs as they sing Auto-tuned lyrics written mostly by committee and wonder why they fail to resonate, Ashley McBryde and others are illustrating the real path forward for country women, which is offering something real, regardless of what the producers and image consultants profess.

Ashley McBryde might be struggling for radio play like the rest of country women, but she also isn’t relying on it, developing strong grassroots from a wide swath of country listeners from working hard, touring harder, and forging a unique sound that can have her range from both badass country rock and roller to more intimate and introspective songwriter, offering something for everyone with good musical tastes to latch onto. Most importantly, when Ashley McBryde sings something, you believe it.

One concern over Ashley McBryde previously has been if she’ll allow the rock edge she brings to some of her music to bleed over too much into what makes her such a cool country performer—a concern that’s especially true when you’re working with a producer like Jay Joyce. But the first single from Ashley’s upcoming second major label release is everything you want from an Ashley McBryde song. It’s edgy and gritty, but still country in the way the words and melody tell a true story we all can relate to, and deftly employ the double entendre to give it that classic country feel. 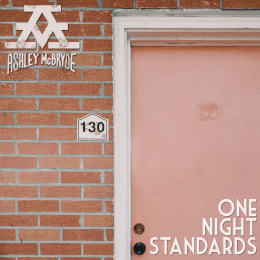 Taking inspiration from that sinking feeling that both precedes and proceeds a short romantic encounter, “One Night Standards” speaks to the quiet desperation and lowered expectations behind an experience often sold as just “having a little fun” when it’s really more about fulfilling a carnal and emotional need not being fulfilled anywhere else. As “fun” as these encounters many be in the short term, they tend to be chased with an ample degree of loneliness and regret that “One Night Standards” embodies in both what the lyrics say, and what they don’t. Perhaps another verse could have been written between McBryde, and her co-writers. But clocking it at just over 3 minutes, this will keep radio programmers happy.

Producer Jay Joyce doesn’t allow the steel guitar to seep in until the second verse, and the guitar solo of “One Night Standards” sounds like Richie Sambora playing for a packed house at Madison Square Garden circa 1987. But the song doesn’t veer too out-of-bounds for modern country and the crunchier sound that is symbolic of Ashley McBryde’s signature style, while McBryde’s voice itself imparts delicious amount of down home twang.

We have no title or timetable for when Ashley McBryde will deliver her new record aside from the ambiguous “2020,” but “One Night Standards” does give you plenty to be excited about whenever it arrives, and hopefully, something radio will at least consider for moderate rotation.

“One Night Standards” was recorded with McBryde’s touring band, and co-written with Nicolette Hayford, who also worked with Ashley on “A Little Dive Bar in Dahlonega,” as well as (cough) Shane McAnally.