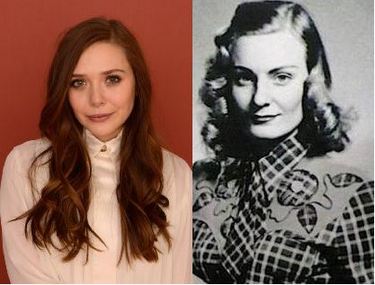 The upcoming biopic on Hank Williams entitled I Saw The Light has its leading lady. The part of Audrey Williams—Hank’s first wife and one of the foremost influences on his music—will be played by Elizabeth Olsen, little sister of famous twins Mary-Kate and Ashley Olsen, and recent star of films such as Captain America:The Winter Soldier and Godzilla. She will play Audrey across from Tom Hiddleston, who is known for his own acting in comic books films as well as other roles. They will be directed by Marc Abraham, who also wrote the screenplay for the film based off of Colin Escott’s Hank Williams biography.

Like her sisters, Elizabeth Olsen began acting at a very young age. At 4-years-old she was appearing in the movies of her older twin sisters, but walked away from acting briefly after the controversy surrounding Mary-Kate’s eating disorder. Her role in the 2011 movie Martha Marcy May Marlene is given credit for starting her acting career in earnest, and Elizabeth has since starred in eleven other films, including another comic book movie, Avengers: Age of Ultron set to be released in 2015.

Audrey Williams, born Audry Mae Sheppard, was married to Hank Williams from December 15, 1944, until July 10, 1952. Hank Williams later remarried, but as a performer herself, an important player in the Hank Williams estate after Hank’s death, and the mother of Hank Williams Jr., Audrey’s influence on both the story of Hank Williams and country music as a whole looms large. Audrey played upright bass in Hank’s band upon occasion, and had aspirations of stepping out into her own spotlight. “Her duets with Hank were like an extension of their married life in that she fought him for dominance on every note,” says biographer Colin Escott. Audrey is buried beside Hank Williams in Montgomery, Alabama.

The production for I Saw The Light is also gearing up for an open casting call for some of the movie’s smaller speaking roles and extras. The casting call will be held on September 14th from 11 AM to 4 PM at 6901 W. 70th Shreveport, LA 71129. They are also soliciting the public for classic cars to use in the film.

“Also we are looking for extras of all ages (mostly adults) and anyone who has any ‘western outfits’ should attend the open call wearing those outfits,” the casting call operated by Legacy Casting says. “We are also seeking period vehicles 1930-1950. It is not necessary to bring the vehicle, but please bring good photographs of the vehicles. Everyone should bring non-returnable current photos of themselves for us to keep.”

I Saw The Light will begin shooting in Shreveport, Louisiana in mid October. Rodney Crowell is the Executive Music Producer for the film.