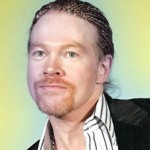 Last week, Axl Rose became an enemy to some, and a folk hero to many when he not-so-politely declined his induction into the Rock & Roll Hall of Fame as part of the original lineup of Guns & Roses, and then went on further to question the legitimacy of the whole institution, it’s funding, it’s voting practices and how it justifies its mandate of deciding who gets to be deemed the most important Rock & Rollers of all time.

I still don’t exactly know what the Hall is or how or why it makes money, where the money goes, who chooses the voters and why anyone or this board, out of all the artists in the world that have contributed to this genre, officially “rock” enough to be in the Hall?

By Axl being willing to sacrifice a little bit of his legacy, he solidified it for all time by proving he is one of the most devout rock & rollers of them all, and what a sham of an institution the Rock & Roll Hall of Fame has become in many people’s eyes. Some consider the Rock & Roll HOF a sham because The Beastie Boys, or even Axl’s Guns & Roses were inducted into it before the Canadian band Rush. Others think it’s a sham because Madonna and many others were inducted at all.

Was/is Madonna rock & roll? How about Hank Williams or Johnny Cash who are both inductees? Johnny Cash a little…maybe. Could you see The Beatles and Led Zepplin being members of the Country Music Hall of Fame based solely on their importance in music? Elvis is in the Country Music HOF, but this was in consideration of his deep rockabilly, gospel, and Tennessee roots.

The Country HOF has also done its rock & roll counterpart one better by keeping its list of inductees fiercely exclusive, not pandering to every petition drive or pretty name who might meet the requirements, being inclusive with their coverage of all aspects of the genre (their new exhibit on California Country being a great example), and being transparent in their operations, financing, and voting system.

Nothing But Respect for the Country Music Hall of Fame

Make no mistake, The Country Music Hall of Fame is not perfect, but it is better at preserving its purity than many other country music institutions, like The Grand Ole Opry for example, or even country music itself. Country music fans should be peacock proud of their Hall of Fame, but at the same time take wisdom from Axl Rose’s words, and the mistakes made from its Rock & Roll counterpart. Radio formats, awards shows, TV specials, they all must dabble with the here and now that doesn’t have the benefit of time to prove whether the content is worthy of recognition or not. But with a Hall of Fame, purity must be preserved at all times for the institution to remain strong.

Axl Rose, along with the Sex Pistols’ Johnny Rotten may have been some of the first to refuse their Rock & Roll HOF inductions, but after witnessing the success of their decisions, it’s easy to assume they will not be the last. Let’s hope that the Country Music Hall of Fame does not begin to be known for who requests to remain outside of its round walls, but for who’ve been granted the exclusive and distinct honor of being welcomed within.