Trigger Down with Pop Country 153 Comments 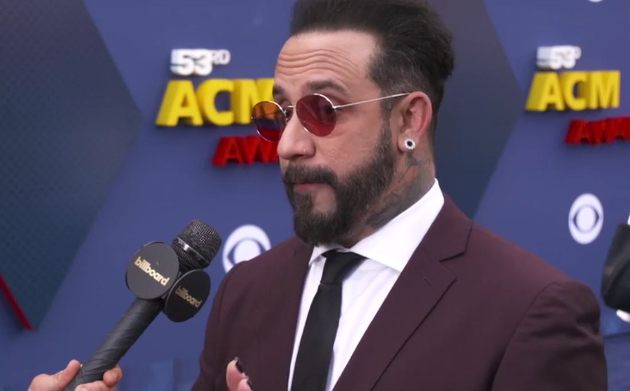 A.J. McLean, listen to me you Backstreet Boy-singing, choreograph-dancing, bad neck tattoo, black nail polish-wearing, interloping, carpetbagging, no talent-having son-of-a-bitch with a receding hairline and a shitty, arrogant attitude, if you think you’re going to waltz right into country music exhibiting the kind of “fuck everyone” candor you displayed on the red carpet of the ACM Awards, you’re about to get a big Waylon Waymore Watasha Jennings size 12 steel-tipped boot right up your dumb ass and an ugly wake-up call that this shit doesn’t fly in by God country music, asshole.

In 10 years and 11 days of owning and operating Saving Country Music dot com, I have never once seen someone display such bold-faced effrontery and wanton disrespect for the gorgeous and historic institution of country music as this washed-up fuckstick and his $50,000 diamond-encrusted gauge earrings and stupid rose-colored glasses did as he spent last Sunday running up and down the ACM red carpet telling anyone with a camera he’s going country baby, and we better watch out because he’s “coming in to disrupt.”

Now let’s just all take a deep breath for a second and appreciate where we are in country music at this very moment. On April 17th, 2018, it is a purely pop star named Bebe Rexha, with a purely pop song called “Meant To Be” that was never meant to be released to country radio that has been sitting in #1 spot on the Billboard Hot Country Songs chart every single reporting week for the entirety of this year, plus ranging back into December 2017. 20 weeks of this unrelenting shit, and counting . . .

Right now in country music, Kane Brown and his playlist manipulating ass sits at #1 on the Country Albums charts. Jason Aldean just won the ACM Entertainer of the Year, and delivered arguably the worst performance of the entire evening. The press has made the country genre into a political proxy war to push politically biased agendas, and pit artists against each other and their own fans to sow chaos, and if necessary, destroy the entire genre if it won’t bend to their will. Country music is circling the toilet, ready to spontaneously combust, and has been overrun with pop stars like never before….

…and A.J. McLean of the Backstreet Boys is somehow going to waltz into country music and do something so out of left field, you’re going to disrupt all of this?

Here’s what A.J. McLean said to Billboard at the ACM Awards.

I am coming in, but I’m coming in to disrupt country. I wanna come in and shake things up. I’ve always loved country…But after we did ‘God, Your Mama, And Me’ with Florida Georgia Line… something just kind of clicked and I just got this overwhelming inspiration to just give it a go.

Yeah, that something that just clicked was the fucking cash register in your head, you 40-year-old former model looking for a career revitalization at the expense of your self-respect and the integrity of the country genre.

A.J. then continues to Billboard, “Let country take a risk…”

Wait a second, you want country to take a risk on you? The reason you take risks is in hopes of reward. What the fuck kind of reward is in it for country by letting some washed-up Backstreet Boy come in and use country music as his fee fee bag so he doesn’t have to take out a 2nd mortgage on his mansion in Beverley Hills? We all know the only reason A.J. McLean is contemplating a “country” move is because pop would laugh at his ass if he tried to go solo. Who the fuck does this guy think he is?

A.J. McLean then says, “Florida Georgia Line’s already doing it. That door is slowly opening. Hailee Steinfeld, Bebe Rexha, Jason Derulo. Those guys have done it right. To me, they’re the black sheep. They’ve stayed in their lane. They just do them and look, it’s freaking working.”

See, this is why it’s so alarming when artists collaborate with people from other genres, and there’s no fundamental respect for country music by those they’re collaborating with. Florida Georgia Line has been like a funnel for this type of behavior, with the Backstreet Boys and Bebe Rexha being two excellent examples. And this is where it’s lead to, fucking A.J. McLean mouthing off on the ACMs red carpet about how he’s somehow owed something by country music, and should be given the ability to “disrupt” it.

And this was just the start of A.J. McLean’s self-ingratiating and arrogant promotional tour down the ACM red carpet. He kept working his way down the line of cameras and reporters, stopping at each one to deliver the same rehearsed spiel about disrupting country, including to Entertainment Tonight.

“Out of all genres, country is probably now one of my favorites…” he told ET. So wait, you’ve got this big plan to go country, and you’re only willing to go on record saying that country music is probably your favorite genre? Then A.J. McLean, clearly fighting back irrelevancy amidst a midlife crisis, said to Entertainment Tonight,

It’s all about telling a story. Every song is relatable to anyone. But my goal … a little different. I want to come in and disrupt country. I want to shift. I want to shake things up. Just like FGL did, kind of bringing that pop, urban aspect to it, soulful, kind of that Chris Stapleton, Sam Hunt vibe, but with my voice.

So much wrong here, from mentioning the vibe of Chris Stapleton and Sam Hunt in the same sentence, to praising the storytelling of country, but then seeming to say he wants to “disrupt” that by doing something pop and urban. If you want to do something pop and urban, then why wouldn’t you do something in the pop and urban market? That’s what it’s there for. Urban is the direct antonym of country, and country is the direct antonym of urban. Saying you want to come to country to make urban pop music is an oxymoron. What am I missing here?

What’s so wrong with keeping diametrically opposed musical influences segregated from each other to ensue the integrity of American music’s diversity? Making country music into urban music isn’t the inclusion of diversity, it is the death of diversity, leading to the point where every single piece of popular music in America sounds basically the same no matter what genre of radio station you tune into or what playlist you pull up, forcing the American consumer into less choice, with the only option being to feed off of one big monogenre blob. Let urban be urban. Let pop be pop. Let country be country, and let’s celebrate our differences, see them as what makes us unique and special, show keen curiosity in the tapestry of American cultures in all of their brilliance as opposed to trying to resolve them under false pretenses of open-mindedness in what is nothing more than a guise for commercial opportunism.

And what the hell is A.J. McLean doing on the ACM Awards red carpet to begin with? Sturgill Simpson couldn’t get into the security perimeter at the CMA Awards while holding the reigning Grammy for Best Country Album last November, and yet here is this blathering Backstreet Boys idiot hopped up on General Calderon’s Columbian marching powder paying off security guards to crash the ACMs, getting up in the grill of any news outlet that will have him, and stealing face time from actual country artists just because his shitty, washed-up boy band cut a song with Florida Georgia Line three years ago?

Honestly, I don’t know how Florida Georgia Line and Luke Bryan could even sign off on this guy and his irresponsible rhetoric. This isn’t about “gatekeeping,” this is about good common sense. Everyone has a vested interest in keeping at least some semblance of order in country music. A pop star wanting to go country is nothing new. This has been going on for decades. But for the very first time, instead of someone attempting to ingratiate themselves to the genre, here is someone who starts off by spitting on it, and warning us how he intends to disrupt.

You know on second thought, screw it. What the hell is A.J. fucking McLean going to be able to do in country music? Sure, have him sign to Big Machine Records, write with a bunch of B-listers, record some Cole Swindell leftovers with busbee producing behind a laptop, and get spit out of the ass end of the industry in 9 months as a laughing stock like Steven Tyler. Sure, give it your best shot. But get ready to take on return fire if you’re going to start the process with this type of arrogant bullshit.