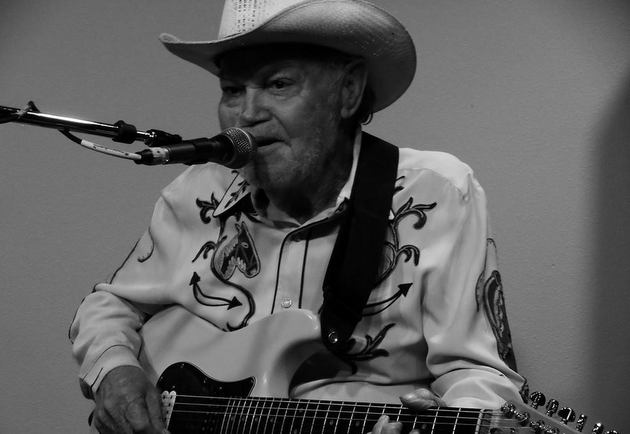 Devastating news out of Bakersfield, California Friday night that country legend Red Simpson has passed away. According to the performer’s family, Red died today, January 8th. Simpson was just getting ready to release his first official record since 1973 in February with his best friend Mario Carboni. Red Simpson was 81-years-old.

A singer, a songwriter, a performer, an important piece of the Bakersfield Sound, and possibly one of the most well-known overlords of country trucking songs, Red Simpson was an important hub in country music that far surpassed his name recognition, or the official accolades he received during his lifetime. Born March 6th, 1934 in Higley, Arizona, and raised in Bakersfield, Red first got his start in music as a piano player, playing in clubs such as the Wagon Wheel and Clover Club in the greater Bakersfield area. Simpson later became the replacement player for Buck Owens at the Blackboard Club, and began writing songs with other Bakersfield performers, including the 1962 Top 10 hit “Gonna Have Love” with Buck Owens.

Recording artist Bill Woods was the first to ask Red to write a song about trucking for him, and soon it became what Simpson was most known for. Ken Nelson of Capitol Records wanted to create a country star specifically based around trucking songs. He first tried to recruit fellow Bakersfield artist Merle Haggard for the job, but Merle refused. In 1965, Red Simpson decided to fill the role, recording his own trucking songs and the trucking songs of others, and the subgenre became the bread and butter of Red’s career. The trucking song “Sam’s Place” that went on to become a #1 for Buck Owens was written by Red. Simpson made his Grand Ole Opry debut in 1972. And in 1975, Red landed his own Top 5 hit with “I’m A Truck.”

Later in his career, Red would switch from Capitol to Warner Bros., but only recorded singles through Warner. Red Simpson released nine albums and compilations, and had eight charting singles, including the #4 “I’m A Truck,” which became his signature song, and his favorite saying. Red’s last charting single was “The Flyin’ Saucer Man and the Truck Driver” released in 1979.

In the 80’s and 90’s, Red Simpson shied away from the performing life, but continued to be a cherished member of the Bakersfield country music community, and a legend to the ones who remembered his early contributions to the West Coast country sound. In 1988, Merle Haggard recorded Red’s song “Lucky Old Colorado.” Red had the original version of “Highway Patrol,” made famous in 1993 by by retro country star Junior Brown. In 1995, Red recorded a couple of country duets with Junior—“Semi Crazy” and “Nitro Express.”

Though Red never toured later in life, he regularly played in and around Bakersfield, including a Monday night residency at Trout’s in Oildale, near Bakersfield. The Muddy Roots Festival in Tennessee had flown Red out a few times to perform over the last few years, and after being championed by a new generation of performers, including Bob Wayne and JP Harris, Red was beginning to experience a resurgence of interest. It was upon this interest that Red decided to record a brand new record called Soda Pops and Saturdays, which he was excited to be releasing in February.

“It is with great regret that we share the news that the legendary Red Simpson has passed,” the family said in a statement. “He was such a caring and wonderful man that he has been described as ‘a walking heart.’ More info will be provided shortly for those wishing to pay their respects. We know you’re up there in truck drivers heaven singin’ and playin’ truck drivin man…”