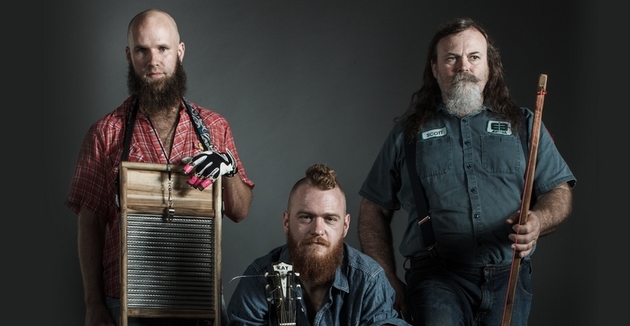 “I don’t remember having stood through an opening act’s show in quite some time. But I couldn’t seem to leave. The were that engaging.” –Billy Gibbons.

There’s no shortage of post-punk rootsy bluesy bands assembling a strange collection of found objects on stage to clang on really hard and really fast to call it music for country punks, just like there’s no shortage of post-grads getting duded up in suspenders and fedoras to play eepish banjo music to hipsters. And the only difference between theses two overindulged disciplines seems to be the socioeconomic backgrounds of the respective players and listeners. What there is a shortage of however is bands who can break through the trendy nature of the roots music business and do it well enough to deserve an audience beyond their local pub.

The Ben Miller Band from Joplin, Missouri is one of those bands, and they illustrate their prowess and commitment to the music in their new album on New West Records called Any Way, Shape, or Form. Procuring the foundation for their music from the pre-war and Delta blues, and jug and string bands of the deep South, their amorphous sound is like a seance for the creaky bones of past generations to animate back to life from the inalienable pull of an infectious groove. Though you’ll hear many of the calling cards of what has become the established Deep Blues sound—including the vintage tone of hollow body guitar, the pluck of a gutbucket bass, and the grate of the washboard—there’s also a more progressive ear brought to this project that results in a sound that is both hauntingly archaic and freshly relevant. Regardless of the lines drawn around your musical identity, the Ben Miller Band finds an end around and gets you to listen and feel. 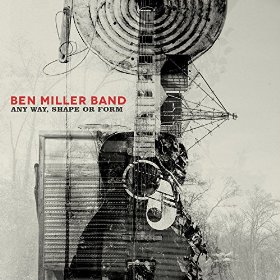 The mowhawked Ben Miller is the ringleader of this trio, but one of the primary things that makes the Ben Miller Band work is the amalagam-like nature of how the band approaches the music. Doug Dicharry is the washboard player and drummer, but is apt to pick up a string instrument just the same. “I don’t know how to play any of these instruments I pick up,” he freely admits, but Doug has a keen sense of what sound a song needs, and the patience and insight to find that sound from whatever happens to be at hand. Scott Leeper is primarily the bucket bass player, but will creep behind the drum set and beat on a big iron piece of orphaned industrial machinery if it’s what the song calls for.

One of the signature elements to many of the Ben Miller Band’s songs is when they run a percussive item through a wah guitar pedal. The result is a very contagious texture that to some might be mistaken as an EDM element in its rhythmic nature, but is much more primal and analog at its heart. This somewhat basic sonic discovery is one of the multiple elements that separates the Ben Miller Band from the flotsam and jetsam of overdone roots music.

And though their foundation is R.L. Burnside / Robert Johnson blues with a more upbeat tempo, the Ben Miller Band exhibit quite a bit of variety and latitude on Any Way, Shape, or Form, including multiple stripped-down country offerings. The steel guitar moans loud in the curiously-sedated “I Feel For You”. “Twinkle Toes” is played primarily on banjo and dobro, and is much more indicative of Appalachia than the Mississippi Delta. And “Prettiest Girl” could have been written by Hank Williams with its swing timing and resolving moral.

It might be a stretch to call Any Way, Shape, or Form a songwriter album, but those shades do pop up in segments, including the very witty “23 Skidoo” that sees the band shape shift once again to a ragtime style. Something that may hold the band back for some is their propensity to veer towards the political in places. The Ben Miller Band’s music should also be approached with the understanding that this is a live band first, though they really put the effort out to make an album that respects the recorded format by adding those little extra moments of composition and extra instrumentation for the home audience.

If anything, this album leaves the listener wanting a little more of their primal, punk blues moments to revel in, but leaving the crowd salivating is probably a good thing. A band like this will always face criticisms of being gimmicky, and will always fall fey to mainstream ears. But they do a good job of diversifying their sound to offer at least something for most listeners in the wide roots audience.

With Any Way, Shape, or Form, the Ben Miller Band carves out a distinctive niche for themselves, and one that elevates them above the common, overdone ruts, while not traveling too far from the primal familiarity of roots music that makes it such an eternal gift.

Preview & Purchase Tracks from Any Way, Shape, or Form