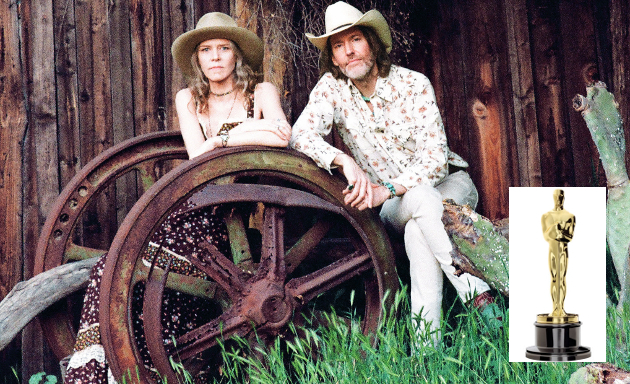 This year’s Oscars will have country music implications. Among the Academy Awards nominees announced Tuesday morning (1-22), David Rawlings and Gillian Welch have been nominated for Best Original Song for their composition “When a Cowboy Trades His Spurs For Wings,” which appears in the Coen Brothers six-part Western, The Ballad of Buster Scruggs. The song was performed by Willie Watson, formerly of Old Crow Medicine Show, as well as Tim Blake Nelson, who plays Buster Scruggs.

Many country and Americana fans were hoping for a Best Original Song nomination for Jason Isbell’s original composition “Old Ways” performed by Bradley Cooper from the movie As Star Is Born. It was one of the big musical anchors of the film. However it was the Lady Gaga and Bradley Cooper-performed “Shallow” that has received all of the awards show love so far, including a Best Original Song nomination from the Oscars.

Both The Ballad of Buster Scruggs and A Star Is Born are also up for Best Adapted Screenplay, and A Star Is Born is up for Best Picture. With Willie Nelson’s son Lukas Nelson producing and co-writing much of the soundtrack for A Star Is Born, as well as acting in the film with his band The Promise of the Real as the backing band for Bradley Cooper, it gives country and roots fans something to root for. Producer Dave Cobb also worked on the film, and Brandi Carlile appears as well. Along with the appearance and musical contributions to The Ballad of Buster Scruggs by David Rawlings, Gillian Welch, and Willie Watson, the film also stars Tom Waits in one of the vignettes.

Other musical implications from the 2019 Oscars include the Bohemian Rhapsody biopic of Queen being nominated in numerous categories, as well as Best Original Song nominations for Kendrick Lamar’s “All the Stars” from Black Panther, “I’ll Fight” performed by Jennifer Hudson, and “The Place Where Lost Things Go” performed by Emily Blunt from the Marry Poppins movie.

With the nominations, there’s also the possibility of a live performance on the Oscars presentation.