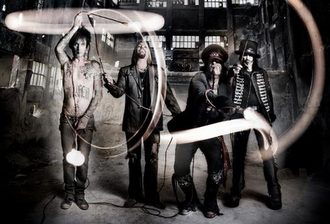 Glam metal band Mötley Crüe confided in the world today that they are calling it quits after three decades, and are doing so in a dramatic fashion by signing a legally-binding contract that stipulates that the band cannot tour after 2015—the time after an upcoming 75-city final tour is scheduled to wrap up.

But buried in the litany of announcements and side stories about the Mötley Crüe retirement was a little nugget of info with a country music angle. Apparently the band has signed a contract with Scott Borchetta and Big Machine Records—the home of Taylor Swift, Rascal Flatts, and Tim McGraw—to produce a country-themed Mötley Crüe tribute album to be released this summer.

Scott Borchetta was at the press conference announcing the Mötley Crüe retirement, and proclaimed himself a “not-so-secret” fan of the Crüe, saying, “Our album will highlight just how great the Mötley Crüe song catalog is.”

Mötley Crüe will not be playing any of the music on the album, and the band is not planning to “go country”. Instead the music will be handled by a list of current country stars. Confirmed artists already on board for the tribute album include Big Machine artists Florida Georgia Line, Brantley Gilbert, and Justin Moore, as well as LeAnn Rimes Eli Young Band, and reality star Cassadee Pope.

Insert your favorite anecdote about how modern country is nothing more than rehashed 80’s hair metal here.