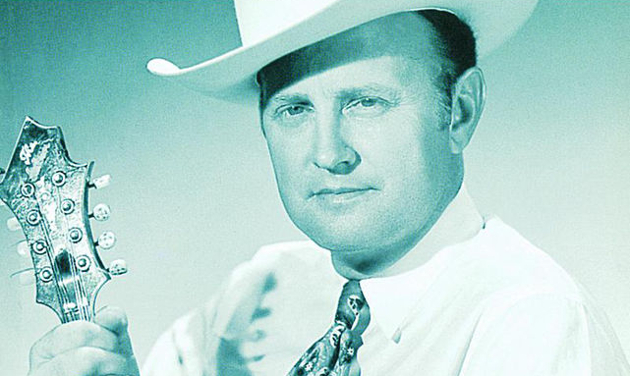 The name “Bill Monroe,” the bluegrass legend’s likeness rights, ownership of the URL “BillMonroe.com,” the name of his iconic band the “Blue Grass Boys,” even the historic Uncle Pen’s Cabin in Rosine, Kentucky, along with other valued artifacts and memorabilia from the Bill Monroe estate, have all been put up for sale, leaving some fans, historians, and archivists a little worried about who may be the eventual owner of arguably the most important name in bluegrass music.

Bill Monroe, known as the Father of Bluegrass, passed away in 1996 at the age of 84 after a storied career that saw him ostensibly invent the bluegrass genre from Appalachian roots and old time fiddle music, eventually landing him in both the Country Music Hall of Fame, and the Rock and Roll Hall of Fame. Beginning his career with brother Charlie as the Monroe Brothers, Bill first joined the Grand Ole Opry in 1939, and spent nearly six decades entertaining crowds as a songwriter and mandolin maestro revered internationally for his influential music.

A large quantity of items from the Bill Monroe estate was initially sold off at the Country Music Hall of Fame at its original location on Music Row in 1996 after Monroe’s death. Many items held back from that initial sale by Monroe’s son and grandson were subsequently sold off in Gallatin, TN in July of 2016 in an estate sale. But the new items up for bids mark the biggest pieces of the estate to go up for private ownership, and is one of the few instances of a country music legend’s entire name and likeness being sold.

Along with name and likeness rights and other major properties, 250 live recordings from Bill’s Bean Blossom Bluegrass Festival, over 1,800 personal and business checks, including some written to Earl Scruggs, Ralph Stanley, and Johnny Paycheck, knives and watches, Bill’s social security card, credit cards, Christmas cards, his personal record collection, a fiddle Monroe owned for 67 years, thousands of personal papers, collectibles, suits, coats, shoes, ties, and even his Last Will and Testament are up for sale.

It is all being offered by Tony Conway of the Conway Entertainment Group, who is the exclusive agent for the Bill Monroe Estate. “While at Buddy Lee Attractions, I was the agent for Bill Monroe for over ten years. I thought of Mr. Monroe as a national treasure. He was like a grandfather to me. We were good friends,” says Conway.

Undoubtedly, heirs have the right to do whatever they wish with the Bill Monroe legacy, but often the sale of important music memorabilia calls into question whether certain items are too important to be held in private ownership, especially if they’ll be kept out of public viewing.

Jerry Garcia’s iconic wolf guitar was just purchased at auction for $1.9 million by Brian Halligan, CEO of marketing group HubSpot and a self-professed Deadhead. Many important artifacts from the Waylon Jennings estate were auctioned off in October of 2014, including many items of historic significance that would be considered by many music fans as museum worthy. One bright spot is the Waylon estate liquidation also benefited a local charity. Brian Halligan’s winning bid of the Jerry Garcia guitar was matched with an anonymous donation to the Southern Poverty Law Center.

The sale of Bill Monroe’s name and likeness means these things could be used in marketing, on products, while the ultimate owners of the Uncle Pen Cabin could have profit or private use instead of preservation in mind with the property.