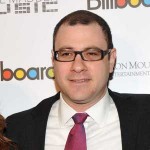 On Friday Jessica Northey of CM Chat and Rita Ballou of Rawhide & Velvet interviewed Billboard Magazine’s editorial director Bill Werde about various topics, including the controversial new rules (at least in some circles) on how Billboard is tabulating the rankings on country’s “Hot 100” songs chart (see full interview below). Werde himself has been in the cross hairs of some country music fans who are worried the new system favors crossover pop artists, and hinders more traditional and up-and-coming independent artists.

Instead of hiding behind Billboard’s walls, Bill Werde has been engaging concerned fans since the rule re-organization was announced, through his Twitter account, and in Friday’s live video discussion format. Though Werde may have disappointed some folks with the answers he gave about the new chart rules, he proved himself open for feedback, opinions, and criticism from the other side, eager to engage a discussion and explain how Billboard came to its conclusions.

Bill Werde also offered some insight on his opinions of how country radio has been trending toward pop for a while, and how not everybody in the industry is happy about that.

It’s clear to me that over the last 10-15 years, there’s been a change in the style of what country radio plays. And there’s certainly plenty of people that I talk to that privately because they work in the business and they don’t want everyone to know this, but that don’t like that change, that say country music is going pop. But that’s what’s happening right now at this moment, this doesn’t mean it’s going to be this way forever. But right now country radio, country music IS going pop a little bit. 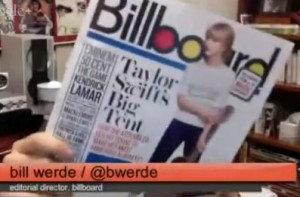 Bill was continuously cracking jokes throughout the interview relating to conspiracy theories that the new chart rules came about to purposely undermine Carrie Underwood, and were put in place to benefit Scott Borchetta’s Big Machine Records, and specifically Taylor Swift.  “I’m here to tell you right now that I don’t care that much about Taylor Swift,” Bill joshed wile holding up the cover of the latest Billboard edition proclaiming Taylor Swift’s “big tent.” But Bill was serious when addressing accusations that the new rules were meant to undermine certain artists.

We announced these rule changes weeks ago. And we’ve been talking to the industry for months. There was certainly no timing element. This notion that I’m somehow best friends with Scott Borchetta or whatever? I think Scott’s a great guy, I wish I had his head of hair. He’s making a lot of the right moves in the music business right now. But the last time I talked to Scott was I don’t know when, and it certainly wasn’t around these chart changes.

It doesn’t behoove my brand to do anything that lacks integrity. We are as good as our charts, and I wouldn’t in a million years do anything that would call into question if we’re being fair and honest. 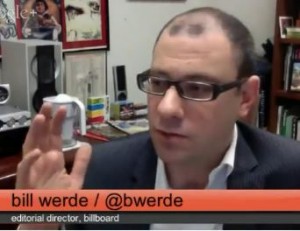 Bill also pointed out how the old model of the Billboard country song chart was based almost solely on airplay, and how that put the power of the charts in the hands of a few select radio programmers.

It’s not fans choosing the genres of songs, radio programmers are choosing the genres of songs. And these days, “radio programmers” means frankly a small group of people in a centralized giant corporation for the most part, making the choice about if a song is playable on radio or not. Whereas using Spotify and other streaming services, I think that much better captures what fans are choosing to engage with.

As far as any opportunity of a revision to Billboard’s new song chart rules, Werde did not seem to leave open that possibility. “I am completely at peace with that decision, the business is at peace with that decision.” However Bill also explained that the way Billboard’s charts are formulated is always in a state of flux, and that feedback and engagement with country’s fan base is something valued by Billboard.

We’ve continuously evolved the charts. Billboard’s 118-years-old, we’ve been charting music for about 60 of those years, and there hasn’t been probably more than a 6 month period where we haven’t made some changes to the charts, ever.

There were definitely fans that asked certain questions on Twitter that made me change the way I thought about things, or made me go back to Silvio (Billboard’s chart director) and say, “Did we think about this, this way?” And Silvio would have a great answer.

Werde had a few misses. He never addressed the issue of Taylor Swift’s song “We Are Never Ever Getting Back Together” being labeled as pop by her own label, and why the pop mix of the song is appearing on the country chart. He also attributed 98% of the country opposition to the new Billboard chart rules to Carrie Underwood fans, or people who, “track back very quickly to being Carrie Underwood fans,” when Saving Country Music, its readership, and others would not fit in that demographic whatsoever.

As someone favoring some elements of the new Billboard song chart rules, and opposing others like the cross genre airplay rule, I believe it is time for pragmatism to attempt to persuade Billboard in a direction to make the charts more equitable to all country artists in the future. Billboard is giving no signs of reversing ship, and as Bill Werde said on Friday, “I like the engagement and I learn things from fans all the time. But that said, respect and regard should be a two-way street.”

So instead of shaking fists, we should follow Bill’s advice and, “Give this chart change a few weeks.” If the anomalies show up with Taylor Swift’s album release that some anticipate–that she could completely dominate the chart with every single song off of her new album based on digital downloads alone–this and other events could force Billboard to tweak or re-evaluate rules in the future, like Billboard did when Lady Gaga sold an album for 99 cents, unfairly inflating her sales.

Traditional country fans, and fans of up-and-coming artists still have a right to be disappointed with the new rules, but the best way at this point to resolve the issues with Billboard’s country charts may not be to float conspiracy theories and gnash teeth, but to become more engaged with an entity that appears to be willing to engage with them, as long as the respect is a two way street. The other important thing is to make sure the issues with the “Hot 100” country chart are not forgotten, or that country doesn’t accept Billboard’s “Country Airplay” chart as a consolation prize.