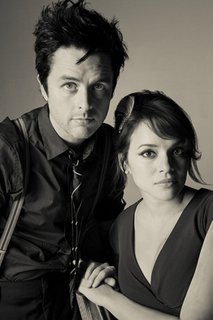 When you first heard that Billie Joe Armstrong of the arena punk band Green Day and darling little lounge singer Norah Jones were teaming up to make an Everly Brothers tribute album of all things, you wondered if this was some drunken dare taken way too far. At the same time, there was something about the idea that seemed just insane enough to make some strange bit of sense.

Whatever you think this album is going to be, whatever you think in your little music brain it will sound like as you squint and try to envision Billie Joe, Norah Jones, and the Everly Brothers sharing the same 3-bedroom apartment, you’re probably wrong. For starters, you’re not going to get any of the noted Everly Brothers hits. No “Bye Bye Love,” no “Wake Up Little Susie,” no “Bird Dog,” “All I Have To Do Is Dream,” or other recognizable Everly Brothers standards. Foreverly is not a tribute album in the traditional sense, it is a reboot of a specific album, a reinterpretation of the 1958 Everly Brothers’ Songs Our Daddy Taught Us, song by song, line by line, with virtually the same track list, ratcheting up the strange factor yet another notch.

What this results in of all things is a stripped-down, old-time, primitive country record, referring back to the Ralph Peer era in country music; very rootsy, with murder ballads and Gothic American textures, and traditional, folksy themes and compositions.

During the height of their success in 1958, brothers Phil and Don Everly decided to make what today might be considered a concept album, taking traditional songs the brothers were taught by their father and assembling them on one record. Though the brothers were known for taking country songs and giving them a rock and roll twist, Songs Our Daddy Taught Us was very traditional and straight laced. No big hits came from the album, but it was seen as very forward and innovative at the time. Call it the Everly Brothers’ contribution to the brewing folk revival in American music in the late 1950’s.

Enter Billy Joe Armstrong in 2013, who it might not be surprising to hear is an Everly Brothers fan because of what building blocks for rock and roll the Everlys were, but it’s a bit curious of how he got so endeared with this particular album, and then lassoed Norah Jones of all people to be a part of it. Apparently Billy Joe thought more attention deserved to be paid to Songs Our Daddy Taught Us, and feeling a female voice would be an easier fit for the close harmony style of the Everlys (and finding Norah through mutual friend Stevie Wonder), Forevely was born. 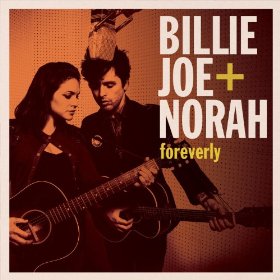 The focus of Foreverly is the close harmonies struck by Billie Joe and Norah, and the chemistry this harmonization conjures, giving classic tunes from the early chapters of the American songbook new vitality. In a sense, the music has little to do with the Everly Brothers aside from the duo being the vehicle for this particular collection of traditional tunes to be assembled, and how the vocals are arranged. The collection includes traditional songs like “Roving Gambler,” “Down In The Willow Garden,” and “Barbara Allen,” with only the final track, the traditional “Put My Little Shoes Away” adapted by the Everlys.

The production of Foreverly, just like its 50’s counterpart, is very subdued, accentuating the vocal performances and the primitive, and sometimes dark themes of these classic tunes. About the only difference between the Everly Brothers’ Songs Our Daddy Taught Us and Foreverly is the 55 years of recording technology that brings more clarity to the newer performances. But the instrumentation is mostly simple acoustic arrangements, piano, maybe some simple brush drums, with about the only exception on Foreverly being the track “Kentucky” where tasteful electric guitar makes an appearance in an arrangement that probably takes the most liberties compared to the Everlys’ original.

The more you study this project and the Everly Brothers’ original Songs That Daddy Taught Us, the more the music intrigues you. Though Norah Jones is given equal billing on the cover, this is Billie Joe’s baby from a behind-the-scenes standpoint.

Both Billie Joe and Norah sit in this weird reality of public sentiment as wildly-successful artists who are not pop in the normal sense, but have made successful careers instilling sensibilities in what is supposed to be music on the fringes of popularity. Simply their names will leave some on the sidelines of Foreverly, which really isn’t fair to either the artists or the music. Billie Joe Armstrong is seen as the ultimate sellout by hardcore punks, but when the Green Day album Kerplunk sold 500,000 copies on a tiny indie label in Oakland, the band have no choice but to enlist the services of the recording industry. Similarly, Norah Jones is discounted for her success, while the quality of her music gets lost in the shuffle.

Foreverly is one of these albums meant to be listened to for the appreciation of the artistry, subtly, and texture, and when approached in that manner, or in the manner of trying to ignite renewed interest in the Everly’s contributions to American music, it is a very successful endeavor. If approached as something to listen to while raging through your daily commute, it is going to comes across as dry and sleepy because there’s just not a lot of pep or spice in this album. But kudos to Billie Joe for putting such heart into this music, and Norah for blending so sublimely, and bringing a cool little piece of American music history back to life.