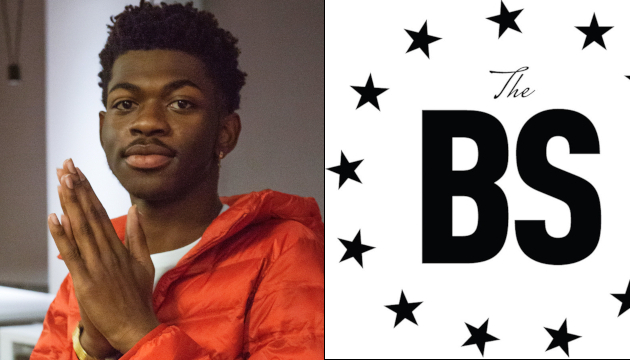 Once again a major periodical has presented a completely false timeline for the removal of Lil Nas X’s “Old Town Road” from the Billboard Hot Country Songs chart in an attempt to pin the inspiration for the removal on Saving Country Music. Joining Pitchfork writer Sheldon Pearce in an article published on April 1st, and an article posted on April 9th by Rachel Leah on Salon, the Bitter Southerner article written by Dr. Joycelyn Wilson, PhD published on June 13th goes out of its way to specifically state that Saving Country Music’s first article on Lil Nas X and “Old Town Road” was posted before the removal. 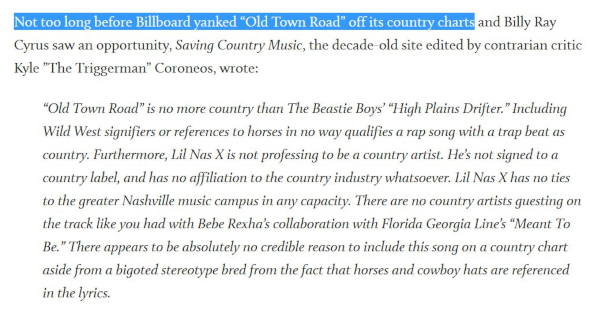 But of course this is completely incorrect. As Saving Country Music has now been forced to clarify multiple times, including in detail in the article Lil Nas X, The Media Echo Chamber, and Shane Morris’s Vile Past, “Old Town Road” was removed from the Hot Country Songs chart by Billboard on the chart first made public on March 18th, which can be verified in Billboard’s Country Update publication published on March 18th. Saving Country Music first addressed the issue five days after that, on March 23rd. Saving Country Music’s comments came after the removal, not before, and this is clearly and easily verifiable.

This is not a trivial concern. The result of this incorrect reporting by Pitchfork, Salon, now Bitter Southerner and others is to present a timeline where country music purists had pressured Billboard to removed the song as opposed to Billboard coming to their own conclusion independently after it was determined the song was not appropriate for the charts. This misrepresentation of the timeline—purposeful or accidental—is being used to imply racism was behind Billboard’s decision.

As Lil Nas X’s manager Danny Kang has admitted, Lil Nas X chose country as the genre for “Old Town Road” in metadata listings to game the system, and to receive more traction since the song would chart better in country where it would face less competition. Danny Kang told Rolling Stone on March 26th, “There’s a way to manipulate the algorithm to push your track to the top. That’s favorable versus trying to go to the rap format to compete with the most popular songs in the world.”

The Bitter Southerner article also asks, “Would Coroneos have made a similar assertion about Aldean and Ludacris’ ‘Dirt Road Anthem’ remix and its recognition as a country rap song?”

But there is not reason to present that question as a hypothetical. Bitter Southerner and Dr. Joycelyn Wilson, PhD could simply check the Saving Country Music archives via the search window and immediately determine that “Dirt Road Anthem” was vehemently opposed here. The song received a 0/10 grade, and it’s effects, including the collaboration with Ludacris, were covered in detail in the article, How Hip-Hop Stole Country: The Arrival of the Mono-Genre posted in 2013.

Dr. Joycelyn Wilson, PhD then goes on to say, “…an artist must identify as a country artist for their music to be considered country rap, country trap, or country hip hop by the country music industry, where most of the chart-topping country artists are white and male,” implying that the only reason that Lil Nas X was opposed by Saving Country Music is because he’s African American, while Jason Aldean was given a reprieve because he was white—which of course didn’t happen. Nor did it happen for Bebe Rexha and her song “Meant To Be.” Saving Country Music posted nine dedicated articles imploring Billboard to remove the song from the country charts to no avail.

More than just the mistakes and poorly researched implications by Dr. Joycelyn Wilson, PhD and Bittern Southerner, the glaring timeline mistake at this late stage of the debate clearly shows that both confirmation bias, and a media echo chamber continues to persist around the “Old Town Road” issue. Dr. Joycelyn Wilson, PhD did not independently research her facts, she simply took the wrong information published by now a dozen or more outlets and posted it as her own. This is the same echo chamber that still has now discredited Twitter personality Shane Morris still listed as a “former country music label executive” in The New York Times, The Guardian, and other places, despite coming out as a liar himself in a lengthy mea culpa.

Attacking country music (and Saving Country Music by proxy) for the removal of Lil Nas X has become fashion on social media, with now PhD’s actively engaging in posting falsehoods to present a specter of racism that despite country music’s spotty history, does not exist whatsoever when it comes to Lil Nas X and “Old Town Road.” However the accusations do have implications for those being accused of racism under false pretenses and with incorrect facts.

Dr. Joycelyn Wilson, PhD has responded to Saving Country Music’s concerns on Twitter by saying that the timeline presented was not incorrect, citing the Salon article posted on April 9th by Rachel Leah as her verification that Saving Country Music’s first article on Lil Nas X and “Old Town Road” was posted before the song’s removal by Billboard. However as was illustrated and verified above, Salon‘s representation of the timeline was also incorrect, and was originally debunked by Saving Country Music on April 12th in the article Lil Nas X, The Media Echo Chamber, and Shane Morris’s Vile Past.

Furthermore, by Dr. Joycelyn Wilson, PhD citing the Salon article as her source that the removal of “Old Town Road” came after Saving Country Music’s article, she is emphasizing and underscoring that it was indeed a media echo chamber as opposed to independent research that led to her inaccurate portrayal of the timeline in the first place. Dr. Joycelyn Wilson, PhD even screenshot the excerpt from the Salon article as her evidence.

“What’s unprofessional are the lies you’re telling right now to discredit my essay for calling you out,” Dr. Joycelyn Wilson, PhD said in a tweet posted Monday morning. “Your op-Ed was written BEFORE the song was pulled.”

But once again, this is easily verifiable as being incorrect by simply looking at when Saving Country Music posted its initial article, and when Billboard removed “Old Town Road” from the Hot Country songs chart. Billboard made the removal on March 18th. Saving Country Music first addressed the issue five days after that, on March 23rd. 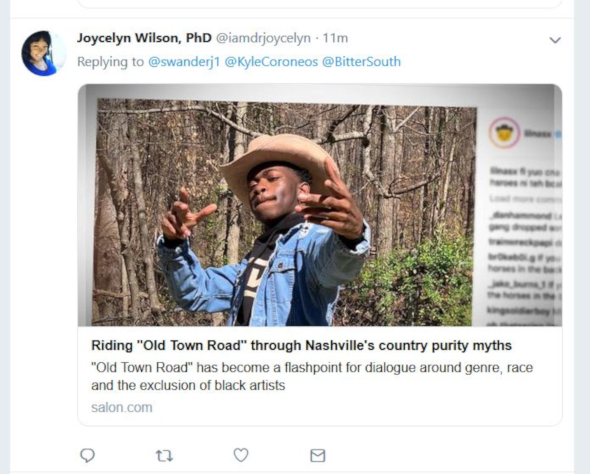 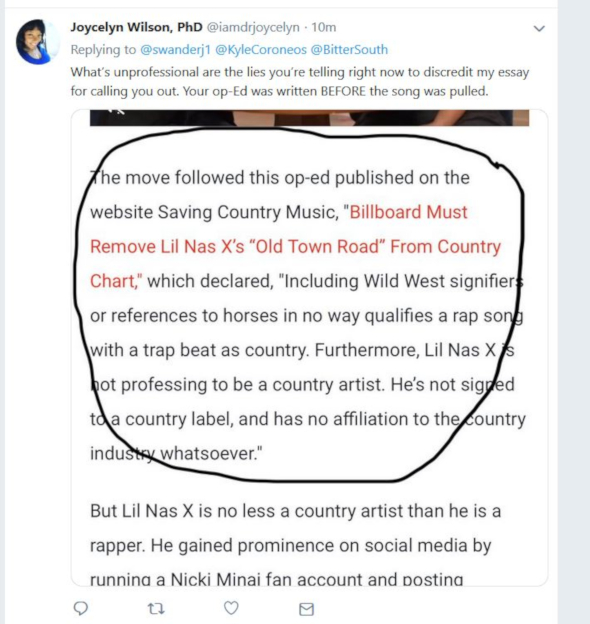