If you didn’t get your fill with Blackberry Smoke’s recent record Find a Light, or it just increased your appetite for their infectious classic Southern rock vibe, well then you’re in luck. On October 26th the Atlanta, Georgia boys will be releasing the Southern Ground Sessions EP as an accompaniment to Find A Light. Featuring acoustic renditions of five songs from Find A Light and a cover of the late great Tom Petty’s “You Got Lucky,” it’s a stripped-down addendum to the record that went #1 in pure album sales in country upon its release.

“It felt really cool to come back to Southern Ground Studios and play music with some good friends,” says frontman and songwriter Charlie Starr. “It was like stripping it down and playing in the living room.”

The Southern Ground studio is located on the corner of 17th and McGavock in Nashville. Originally built as a Presbyterian Church in 1903, Fred Foster of Monument Records purchased it in 1968, and converted it into a studio. Then in 2012, Zac Brown bought the building, modernized it, and began hosting recording sessions. At one point Blackberry Smoke was signed to Zac Brown’s Southern Ground record label.

Joining Charlie Starr, bassist Richard Turner, drummer Brit Turner, guitarist Paul Jackson and keyboardist Brandon Still in the sessions is Amanda Shires, reprising her role on the song “Let Me Down Easy,” as well as singing harmony on Petty’s “You Got Lucky.” Oliver Wood of The Wood Brothers (who were also once on the Southern Ground label) also lends to “Mother Mountain.” 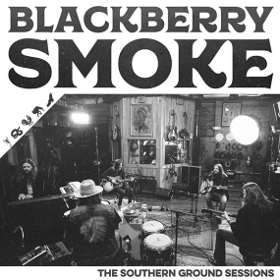 This isn’t the first time Blackberry Smoke has chased a release with some acoustic sessions. A deluxe edition of their 2015 record Holding All The Roses included a five-song acoustic set. That album is also notable for being the first independently-released record to go #1 on the Billboard Country Albums chart, opening up the floodgates for others to do it in the coming years.

Ahead of the release, Blackberry Smoke has made the acoustic version of “Run Away From It All” available (listen below).