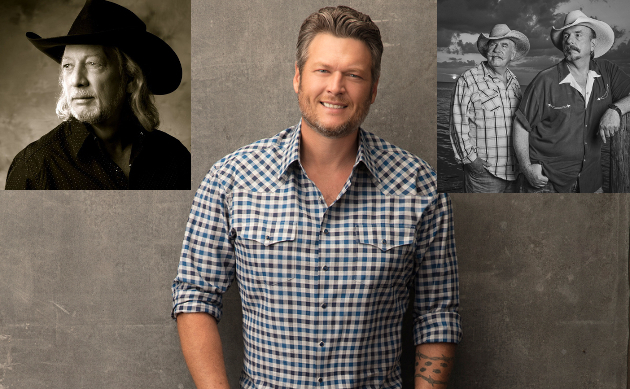 Yes, Captain Old Farts & Jackasses has given traditional country fans plenty of reasons to give him a hairy eyeball over the years or curse his name under their breath (anyone remember the tractor rapping of “Boys ‘Round Here”?) But I’ll be damned if Blake Shelton hasn’t been on some prolonged traditional country kick lately, and it can’t be a bad thing with the audience he commands.

After releasing a run of traditional country covers in late 2018 including “The King Is Gone (And So Are You)” popularized by George Jones, “Tequila Sheila” made famous by Bobby Bare, and “Every Which Way But Loose” sung by Eddie Rabbit, Blake Shelton announced his “Friends and Heroes” tour where he took The Bellamy Brothers and John Anderson, along with Trace Adkins and Lauren Alaina out with him on the road.

Blake Shelton doesn’t tour much these days due to his two-season-per-year commitment to NBC’s The Voice. But by all accounts, the 17-date “Friends and Heroes” tour that just wrapped up Saturday evening (3-23) at the Times Union Center in Albany, NY was a big success, and most importantly, country.

The tour started off in Oklahoma City, with NewsOK raving, “Blake Shelton is taking hero worship to a new level with his new tour … The Tishomingo resident promised ‘a celebration of country music,’ and for 2 1/2hours, he delivered, with some delightful help … Some of the best moments of Shelton’s new show took place when he yielded the stage to his special guests. ‘I feel like sometimes especially the younger people need to be reminded what country music is,’ Shelton said.”

The Buffalo News said Blake Shelton ‘Paid Tribute to His Country Influences‘ in their review, saying “John Anderson, the Bellamy Brothers, and Trace Adkins—three country acts from decades past—played mini-sets of their own during the show. Shelton credited their influence multiple times throughout the night as being the reason he wanted to get into country music, and his genuine admiration of them and joy at getting to share a stage with his idols was obvious … The most special part of the night came near the end, when Shelton and all his guests gathered at the end of the catwalk extending from the main stage armed with just microphones and guitars to perform an acoustic set.”

Speaking to the Indy Star ahead of his concert in Indianapolis, Blake Shelton said, “I think it’s important for not only country music artists to know what their heritage is, but also for the fan base to know who the people are that influenced us current country singers and why we do things the way we do.”

But possibly more importantly than what Blake Shelton has done or said, is how the “Friends and Heroes” tour has sold. Though it was a short run, and fueled by pent-up buying power since he tours so seldomly, it has also been the most successful tour of Blake Shelton’s career, grossing over $1.03 million in ticket sales each night, beating his previous best in 2018 with $997,000. That means Blake Shelton took a bunch of Old Farts and Jackasses with him out on tour (and Lauren Alaina to represent the ladies of country), and had his most successful run so far, underscoring the commercial resurgence of old school country we’ve been seeing lately.

It’s tough to know exactly what the trigonometry behind all of this is for Blake Shelton. Perhaps he’s seeing the erosion in interest in bands such as Florida Georgia Line, and the swell of interest in artists like Luke Combs who are more traditional. Or maybe Shelton’s motivation is not some sinister scheme, and he simply wants to reconnect with his roots. Plenty flush with all that money from The Voice, and not needing radio or awards shows to command a national platform, he can do whatever the hell he wants as opposed to whatever his record label is advising him to do. And when Blake Shelton first started his career, he was pretty damn country. His move towards a more traditional sound was also evidenced on his last record, 2017’s Texoma Shore.

Viewers of The Voice will swear to you that Blake Shelton regularly stands up for traditional country music on the show, and of course classic country songs are often covered during your average season. But talk is one thing, and action is another. For some traditional country fans, covering an old Bobby Bare song and taking John Anderson out on tour will never be enough to atone for all the atrocities they believe Blake Shelton has perpetrated during his career. And for sure, he’s done some pretty dumb things during his career. Let’s also not forget that even though Blake is a member of the Grand Ole Opry, he performed all of two times in 2018.

But the reason we get up in arms when mainstream country artists abandon their roots is in hopes they will hear our voices saying that we still love the more authentic and true versions of country music, and still want to hear it on the radio, and see it on big stages. Regardless of the motivations and calculus, Blake Shelton listened. And most importantly, it paid off for him, at least when it came to the “Friends and Heroes” tour.