Trigger Down with Pop Country 245 Comments 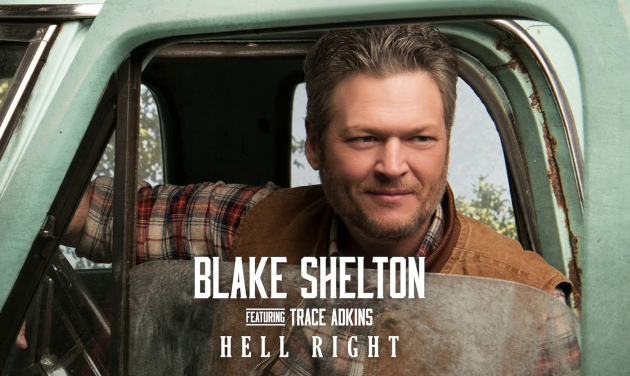 The entirety of Blake Shelton’s career just devolved quicker than a political discussion with your drunk and racist uncle at Thanksgiving dinner. All the nice things said about Blake in the spirit of coming together in country music fellowship after his idiotic “Old Farts and Jackasses” comments back in 2013—and when it really did seem like he was making a concerted effort to be more adult and more country with his last record Texoma Shore and the song “God’s Country”—all that has just been unconditionally and irrevocably eradicated forevermore, and evaporated into thin air upon the release of his new song “Hell Right.” With this song, BS has now racked up such a monumental deficit of ill will with actual country music fans, he’d have to play Hank Williams covers exclusively until 2028 to pay his debts to country music society, and even then, his name would be tantamount to a swear word to many in the country music community into eternity.

Holy shit this song sucks. For making this “Hell Right” atrocity, I hope Blake Shelton’s penis falls off, and his unborn kids go blind. I don’t even know what the second half of that statement means, or how it’s even possible. All I know is hearing this song played anywhere within my general vicinity makes me want to revitalize the Faces of Death movie franchise by drinking a lug of Drano as opposed to being exposed to even a fraction of a second more of this audio monstrosity.

Gwen Stefani should refuse to fuck Blake Shelton for making this song, and hold steady until he pledges to pull this musical abortion from the airwaves and makes a public, tear-filled apology. It is rape and incest of the ears to be susceptible to even a second of “Hell Right.” It’s the country music version of a pandemic biohazard. I would recommend you wear rubber gloves and a respirator even if you just want to take a sniff to see what all the fuss is about. Not even a dig at Lil Nas X can make this song redeemable. In fact all it does is render it hypocritical since “Hell Right” features idiotic monotone rapping and electronic beats just like “Old Town Road,” only rendered severely inauthentic since it’s coming from some cracker Oklahoma farm boy that’s slowly going grey and might as well be yelling, “I’m still relevant!”

Even Trace Adkins, who joins Blake Shelton on the track, seems to scoff at Shelton’s pathetic attempt to coin some new colloquialism with the title and lyrical hook of this “song.” Last time we heard from Trace he was trainwrecking his career with a song whose video featured puppet sex, and was beating the shit out of an impersonator of himself on a booze cruise. Apparently Adkins has sobered up since then, but he’s none the wiser if he’s collaborating with Shelton on this piece of shit. This song is dumber than getting your out-of-date Trace Adkins ponytail stuck in a piece of farm machinery.

Trace Adkins has one of the best voices in country music, and Blake Shelton really had turned a new leaf recently. And now this? Even Blake Shelton’s “Boys ‘Round Here” co-writers Rhett Akins and Dallas Davidson are texting themselves each other back and forth today all “Man this song really does suck.” “Hell Right” was partially written by that country music hemorrhoid “Hardy” who has that idiotic “Rednecker” song out there as well. If you needed further evidence that this Hardy guy is preying on the stupidity of some country fans, “Hell Right” would be the honey pot.

In the last few years mainstream country music has been making serious strides in the right direction, and Blake Shelton has been a significant part of that, releasing country singles of substance, taking legends out with him on tour like John Anderson and the Bellamy Brothers, and recording classic songs by George Jones and Bobby Bare. Now this? If Blake believes this is the checkmate to the Lil Nas X/Blanco Brown scourge, he’s sorely mistaken. Just like those “artists” and their signature songs, Blake Shelton’s “Hell Right” is only country in superficial and stereotypical surface elements, and should be unceremoniously kicked off the country charts as well.

All the headway country music has made over the last couple of years, and now we have to figure out how to maneuver around this “Hell Right” bullshit. “God’s Country” was a major success because it united country fans. “Hell Right” is just another embarrassment that makes many country fans hide their heads in shame. Hopefully it flops and proves that this type of preta Bro-Country needs to be put to bed forevermore.