“Bloodworth” Movie Out May 20th w/ All Star Country Cast 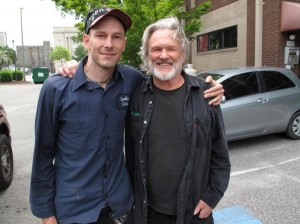 May 20th will be the release of the movie Bloodworth, starring Kris Kristofferson, Dwight Yoakam, Hilary Duff, and Val Kilmer. The movie is based off the novel Provinces of Night by William Gay, and originally the movie was going to have the same name. With such a high caliber country cast, you can be sure music with be integral to the film, and it includes compositions by T Bone Burnett, and “You Don’t Tell Me What to Do”, an original song from Kristofferson.

The movie also contains some contributions from some lesser-known country artists. Hank Williams III makes a small appearance in the movie, as the character “Trigger Lipscomb”. JB Beverley of the Wayward Drifters also contributed the song “Lonesome, Loaded, and Cold” (see below), that was in the premier of the movie and will likely make the editor’s cut, but unfortunately did not make the wide release. Hank III’s voice can be heard at the beginning of this sizzle reel, still with the “Provinces of Night” title:

Yesterday The Boot released the official trailer for the movie:

E.F. Bloodworth (Kris Kristofferson) has returned to his home – a forgotten corner of Tennessee – after forty years of roaming. The wife he walked out on has withered and faded, his three sons (Dwight Yoakam, Val Kilmer, & W. Earl Brown) are grown and angry. Warren is a womanizing alcoholic, Boyd is driven by jealousy to hunt down his wife and her lover, and Brady puts hexes on his enemies from his mamma’s porch. Only Fleming (Reece Daniel Thompson), the old man’s grandson, treats him with the respect his age commands, and sees past all the hatred to realize the way it can poison a man’s soul. It is ultimately the love of Raven Lee (Hilary Duff), a sloe-eyed beauty from another town, that gives Fleming the courage to reject this family curse.

JB Beverley song from the movie:

Keep your eyes peeled for an upcoming in-depth interview with JB Beverley from Misfit Radio, including the scoop about his Bloodworth song.