Bloody Jug Band’s “Coffin Up Blood” is a Big Surprise

Now how much hope do you think I gave a CD entitled Coffin Up Blood from an act called “The Bloody Jug Band” going in? Yeah, not very much. I could just anticipate the band’s back story as I wrestled off the cellophane packaging: “Local punk band facing a dwindling scene has an epiphany at a Goddamn Gallows concert to get into roots music, trades in electric instruments for acoustic ones and joins an endless parade of ‘underground roots’ bands already taxing an anemic fan base.”

“All of this has been done before,” is what I said to myself starring at the cover. Parody is reigning and creativity is lagging. What can we gain from yet another Gothic roots band?

Well if it’s The Bloody Jug Band, the answer is “a ton.”

Forget the heavily death-infused concept, what The Bloody Jug Band has accomplished is releasing one of the most creatively-spellbinding albums in recent memory. Its funny. Its dark. It never takes itself too seriously. It is as engaging as any album I have listened to in years. You can’t stop listening to it, and when you’re not listening to it, you crave it. Think it’s all been done in roots music? Listen to Coffin Up Blood and prove your ass wrong.

Like a proper jug band, they build out from a washboard, washtub bass, jug, and percussion. So many bands try to move forward with the jug concept, but rarely have the rocks to see it through, eventually relegating the “jug” portion of the band to window dressing while guitars dominate the scene. Here though, the guitars, mandolins and such all are added on top of music that at its core is very rhythmic, very percussion and vocally-based. What is so curious to the ear though is how sensible the music is. Its a jug band, but I can hear influences ranging from as far away as David Byrne and Annie Lennox. This music isn’t just wicked, it is wickedly catchy, and for beginning as a jug concept, it is strikingly well-composed and shows remarkable depth in approach. 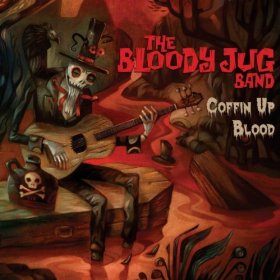 The best part of The Bloody Jug Band is the vocal play between the male and female singers “Cragmire Peace” and “Stormy Jean”. The threads they weave, the amount of space and depth they create in their harmonies as they float and dance with each other is like watching a tantric mating dance from the animal kingdom. They are perfect for conveying the treasure trove of wit and dark humor at the Bloody Jug Band’s core.

The band also calls upon contrast to elevate their music. Like in the song “Blacktooth Growl” whose beginning reminds me of an old Listerine commercial from the 90’s yet whose subject is very dark, or the song “Reaper Madness” that has catchy pop folk arrangement…and is about The Grim Reaper. Don’t let the imagery and words from The Bloody Jug Band fool you. There’s a lot of brightness and playful humor to their music that they use to counteract the darkness and create deep engagement and interest by stimulating the mind. You could take this same music, change the lyrics around at it would probably sell very well in the mainstream. In some ways it’s almost a shame some of these song structures are wasted on dark sarcasm, but they’re only wasted on the closed-minded.

And though this album is dominated by dark sarcasm, two very serious songs, “Moon Bathing” and “The Pain” (showcasing Stormy Jean) are two of the best tracks on the album, uplifting the entire project beyond a gimmick to something that can offer serious substance. After all, the Halloween one-liners could wear out eventually.

I could sit here and write forever on how good this album is, but make no mistake I am fully aware how many people will be turned off before even listening because of the dark verbiage and imagery, and others that may be attracted to it for those very reasons that may be turned off by the popish feel of some of the songs. Listen to me, it is your job as an enlightened music listener to put aside whatever prejudices and listen to this album with an open heart to unlock the tremendous enjoyment it can convey.

At the same time, because of both the accessibility of the music and the artistic approach of the dark subject matter, Coffin Up Blood could be an excellent gateway album to people outside of the Gothic roots world. I could see this album going viral in certain circles, or becoming sort of a cult classic.

They do everything right here. When it looked like we were at a creative dead end, The Bloody Jug Band opens up brand new doors, band new avenues, and challenges both the listener and other artists. We needed this album, which means you need this album.

Purchase Coffin Up Blood from The Bloody Jug Band