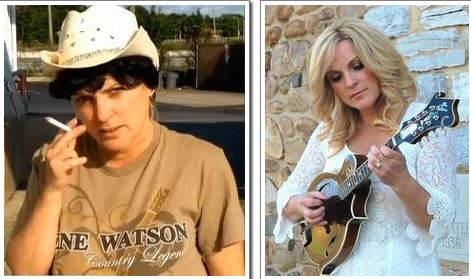 We already knew bluegrass goddess Rhonda Vincent was doing her best to save country music on the stage and in the studio. You don’t have to look any further than her recent two-disc release Only Me that tackles bluegrass on the first disc, and country on the second to see that her roots are pure. In her four decades of performing, starting when she was a young child, Rhonda Vincent has always stayed true to her traditions. What we didn’t know is that she apparently also dabbles as a crime-fighting master of disguise.

When not on tour, Rhonda Vincent keeps her bus stabled at the Hemphill Brothers Coach Company in White’s Creek, TN, just north of Nashville. It’s the same facility where other touring country stars like Tim McGraw and Eddie Montgomery keep their coaches. Apparently the last few times she stored the bus at the location, she noticed a kitty of cash left in the bus’s safe was absconded with when she returned. After deducing that the money only disappeared when the bus was in dry dock, she decided to set up a trap. Rhonda could have just complained to the owners about the issue, or park her bus somewhere else. But that might not solve the problem for other stars that might be ripped off by the same thief.

So Rhonda procured a small camera embedded in an alarm clock that she could use to monitor the safe in the bus. Then she took about $6,000 of cash and dusted it with a special powder that if touched, stays on your hands as a residue for at least 30 days. Then Vincent placed the money in the safe, and brought her bus to the Hemphill Brothers facility and dropped it off for servicing.

Lo and behold, as soon as as one of Hemphill’s workers entered the bus, after checking to make sure nobody was on it, he proceeded to crack the safe, and stuff the money into his pockets. It was determined later that the thief had found the combination for the safe hidden in another part of the bus while cleaning the bus previously. Rhonda watched from a distance as the worker loaded up his pockets with the six grand.

But what happens next shows just what lengths Rhonda Vincent was willing to go to in order to catch this criminal. At some point during the caper, potentially sensing that he was being watched, the worker flipped the alarm clock down so the camera would no longer capture his activities. But Rhonda had a contingency for just such a situation. She was dressed up in a disguise, complete with a black-haired wig and fake cigarette, and wearing a shirt of one of her music buddies, Gene Watson, she made her way to the bus on the Hemphill lot. When she got there, the money was gone, but the camera still had the video footage saved and the traceable residue fingered the crook.

Hemphill Brothers employee Adam Parker was caught red handed, and was later convicted for the crime. Though there were no other specific reports of stolen items or money from other country artists storing their buses at the facility, according to Vincent, when she reported the whole thing to Hemphill management, they told her that theft had been a “black cloud over this place for a long time” and that Tim McGraw once had a theft problem at the facility.

Once Rhonda had retrieved the video footage and Mr. Parker was in the pokey, she took her story to WSMV in Nashville, and the rest is history.