Left Lane Cruiser has now released nine of these ornery sons of bitches, and each one spitting venom and hitting the groove with the same ferocity. Where so many hard charging bands lose their edge as they age and their output gets stale, or they decide they need to wisen up and start singing lullabies, Left Lane Cruiser keeps on digging, if anything, exploring deeper into the heart of their sound. That’s one of the themes of their new record, Claw Machine Wizard, which doesn’t let up, and doesn’t back down. Like they say in the new song “Still Rollin'” – “Stay true to your roots!”

The band’s last record Dirty Spliff Blues was sort of an outlier in their output since it featured the deep blues perennials as a three piece. No offense to that era, but the two piece is what serves Left Lane Cruiser the best, and sensing this before anyone needed to tell them, Claw Machine Wizard takes it back to a two man crew, with long-time guitar player, screamer, songwriter, and founder Freddy J Evans IV collaborating with can kicker Pete Dio who came on board for long-time drummer Brenn Beck during the previous record. 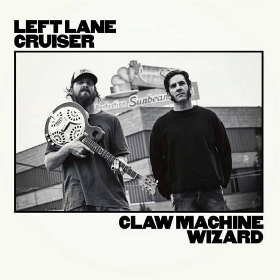 Though Claw Machine Wizard doubles down on their hard-charging sound, which during some periods could be mistaken for downright heavy metal, it also expands on their influences, just in a way that honors the band’s original approach. Claw Machine Wizard is not all piss and vinegar. The song “Lay Down” shows incredible reservation from Freddy Evans with an almost Motown sort of vibe without losing Left Lane’s signature edge.

“Smoke Break” could almost be something from Herbie Hancock’s Head Hunters era, just with a Left Lane Cruiser kick to it. And while many of their lyrics involve kicking and screaming about bad women and poor luck, the final song “Indigenous” shows a layer of depth and message not hindered by the band’s hardcore sound, but fueled by it.

“There’s still a lot of signature Left Lane Cruiser gut-bucket blues, but we’re constantly trying to expand the sound,” says Freddy Evans. “I’ve always kept our foundation in blues and classic rock, but after a decade of making albums, eventually new flavors creep in. On the road we listen to a lot of James Brown, Funkadellic, Parliament, Charles Bradley and other soulful artists … There’s a lot of different flavors on this one.”

Left Lane Crusier’s music has been featured on Breaking Bad and other places, partly because they’re able to channel and capture that desperate energy into amplified sounds like few others. It’s an anger and an edge that is often expressed in music, but not always in a way that adheres to groove and a kernel of melody like Cruiser does, however carnal.

Exhibiting growth while sticking to your roots and the heart of your sound is something every artist and band struggles with, and where many ultimately stumble. But on Claw Machine Wizard, Left Lane Cruiser walks that line with authority, and the result is maybe their most forward-thinking and accessible album yet, while leaving plenty of meat on the bones for those hardcore followers.