I’m going to start this off with a confessional.

Though I get varying degrees of enjoyment from virtually all the bands that constitute the overall “Muddy Roots” world, there was only one that I really just could not stomach: Reverend Peyton’s Big Damn Band. Over the years, there’s been no quicker punch out for me than when Rev. Peyton came on a podcast. It just felt so gimmicky. His voice was so inflected, and the lyrics so repetitive. I never felt the need to go public with my disdain–there was nothing productive in that–and even though I couldn’t stand the music, you’d have to be stupid to not notice that Reverend Peyton is possibly the best finger style slide guitar player the Deep Blues boasts.

But as the songs on Between The Ditches began to trickle out, I began to wonder if Reverend Peyton had evolved into a different animal. When the barrel-chested, Brutus-looking man took the stage at the Muddy Roots Festival this summer with Washboard Breezy and drummer Aaron “Cuz” Persinger, they put on one of the marquee performances of the weekend. The crowd lost their minds, busting up hay bales meant for seating and tossing them in the air in a wild scene.

I swear, it is almost like Reverend Peyton had a little window into my brain when making Between The Ditches, because virtually every one of the concerns I had about their sound going in was resolved, while still keeping what is at the heart of their raucous and rowdy Delta-blues sound completely alive. 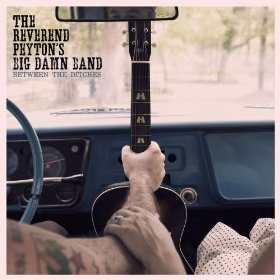 For an underground roots band, Reverend Peyton is “making it.” Worming their way on to the Warped Tour and opening for The Reverend Horton Heat, they’ve found some traction with their music by working hard and taking a professional approach as opposed to compromising their sound. That is what’s great about Between The Ditches. It’s not a change, it is a refinement. Thought Rev. Peyton still has the same bellowy voice, he’s figured out how to employ it better, keep it in check when it could be grating. Though the repetitiveness in some of the lyrics remains, it’s measured. And though there’s still the Vaudevillian feel, there seems to be new value put on the music over the show.

But the best part about Between The Ditches is the songs, like the deep, groovy “Big Blue Chevy ’72”, the fun look at political fatuousness “Shake ’em Off Like Fleas”, and the “Between The Ditches” title track preaching about the dangers bands face being on the road. “The Money Goes” may be the best example of Rev. Peyton’s evolution, how the lyrics evolve over time instead of relying on one catchy line.

The big surprise of Between The Ditches and possibly the best song is the enigmatic “I Don’t Know”. This song catches you completely off guard with its approach and theme. The usually grounded and folksy Big Damn Band gets insightful and inquisitive, as Rev’s slide finds the top register in echo to lyrical lines in a stroke of brilliant composition.

There are a few songs I may have left off, like the repetitious “Shut The Screen” that reminded me of the song “Everything’s Raising” that was seminal to my previous distaste of this band. But one of the great attributes of Between The Ditches is how it guides you into understanding Reverend Peyton’s approach, how he sometimes uses repeating lyrical lines to engage you in a rhythmic cycle meant to ensnare you in the music. This is not music to listen to, it is music to feel. In the spirit of Delta blues, it grooves, and cycles and repetition are important both to its effectiveness, and to the roots of the music.

This is a good album. It’s not for everyone, and Reverend Peyton’s Big Damn Band will always be a better experience live with the energy they evoke. But it’s a great home edition, and a great step in the direction of opening up their music to a greater audience.

Preview & Purchase Tracks from Between The Ditches