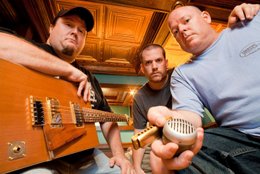 The Ten Foot Polecats out of Boston bring the serious, full-tilt North Mississippi deep blues mojo on their new chest-pounding, groove-infested long player rightly entitled Undertow. As the name implies, this bad boy sucks you down and doesn’t quit tugging you asunder until you wholly submit to the deep muddy abyss of booty-shaking rhythms. They may be from Beantown, but when these boys cut on the amps and microphones and the feeders are cued up, they take your ass all the way back to Junior Kimbrough’s old place in Chulahoma, Mississippi to feel the amplified sweaty smelly pain of the dirty South.

Undertow is the Polecats’ second full-length album, but their first of all original material. It acts as a treatise in the tones and modes of the Deep Blues sound, with guitar man Jim Chilson shedding the low ‘E’ string off his old guitar and putting on a proverbial fingerpicking clinic. Even more so than on their first album I Get Blamed For Everything I Do, Undertow allows Chilson to work uninhibited because of the originality of the compositions, granting his blazing guitar style the ability to breathe and blossom because he’s not just giving his take or interpretation to a blues standard, he’s setting the original standard for the song. Maybe the best part about the Chilson style is the simplest element–the times when he mutes the strings and rakes his fingers across the guitar, sending the rhythm of the song directly to your spine. The man is an absolute  5-string blues guitar savant. 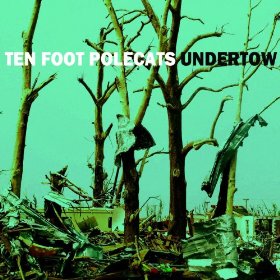 Jay Scheffler is the principal singer and songwriter for the Polecats, and as Jim Chilson is kicking you, Sheffler is holding you down. The man’s got a growl that rivals a set of glass pack mufflers, and makes his compositions sound 60-years-old in the way he’s studied the old blues greats and the verbiage they used. Drummer Chad Rousseau is the newest member of the band, and lends his hand to the compositions in spots as well.

Undertow’s title track is a blues guitar 8-minute instrumental opus by Jim Chilson, and is probably the album’s biggest takeaway. Right behind it though is the rousing opening track “Do That Thing,” the Muddy Roots Festival-inspired “Moonshine And Mud,” and the super fun “Shibble.” What’s a ‘shibble’ you ask? It is something you do with a dibble. What is a ‘dibble?’ Well you’ll just have to listen to the song.

Like with many deep blues albums, the songs on Undertow seem to either capture you, or the don’t. Very little gray area here, so you may find yourself skipping around to tracks and ignoring others. I also wish they would have found a way to dirty up the drums just a little more. I think Chad Rousseau did a great job job composition-wise, it was more the mood that might have been able to be set better in the mixing. Still, if you’re looking for one of those albums that pulls you in and won’t let go, get yourself a copy of Undertow.