Bob Dylan Accused of Plagiarism Ahead of Hank Release 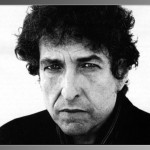 Less than a week away from the release of one of the most controversial projects in country music in years, The Lost Notebooks of Hank Williams, the man Sony ATV put in charge of the project is dealing with plagiarism claims for some paintings in his “Asia Series” on display right now at the Gagosian Gallery in New York.

To clarify, the plagiarism claims have nothing to do with the unfinished Hank Williams songs that are part of the Lost Notebooks project, at least directly. However they do raise even more questions of why a man, outside of the Williams family, and outside of the country genre, who is notorious for being flighty and manipulative of the media, and using controversy to sensationalize interest was put in charge of such a sensitive project. 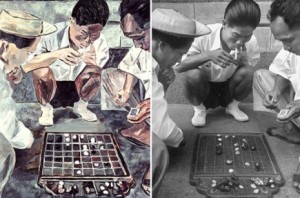 The plagiarism claims are primarily centered around a few Dylan paintings that look like exact copycats of mid-century photographs taken by famous photographers in Asia. As can be seen in this New York Times article on the controversy and in the image to the right, the similarities are undeniable. As Dylan blogger Michal Gray points out while exposing the copycat paintings:

The most striking thing is that Dylan has not merely used a photograph to inspire a painting: he has taken the photographer’s shot composition and copied it exactly. He hasn’t painted the group from any kind of different angle, or changed what he puts along the top edge, or either side edge, or the bottom edge of the picture. He’s replicated everything as closely as possible. That may be a (very self-enriching) game he’s playing with his followers, but it’s not a very imaginative approach to painting.

Though the rules governing visual art and music are very different, the parallels between Hank Williams’ unfinished songs and paintings have been made since the inception of the project. “I just felt like it was someone being handed half of a Picasso painting,” is what Hank Williams’ granddaughter Holly said in the EPK for the Lost Notebooks.

Bob Dylan is possibly the greatest living American songwriter, and possibly the greatest American songwriter of all time. But his propensity to use controversy, or to be mired in controversy unknowingly, raises even more questions on the eve of a release that is mired with questions and controversy already. And Bob’s involvement in the Lost Notebooks is not just exclusive to contributing one song and selecting the other contributors. The project is being released by his Egyptian Records, not Time-Life like so many of the other recent Hank Sr. releases, or on an imprint of the rights holders, Sony ATV.

So far Dylan has not commented at all on the plagiarism claims.