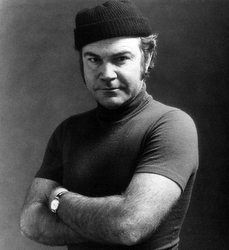 The annual Muddy Roots Festival held over Labor Day weekend announced their initial lineup last week (see below) and at the top of the list was the name of legendary Bakersfield Sound songwriter Red Simpson, chiefly known for his devotion to the story of the American truck driver. Living on the outskirts of Bakersfield in an old trailer park, Red was recruited for Muddy Roots during a chance meeting with Century Media recording artist Bob Wayne who was touring through town.

In a strange turn of events, Bob Wayne found himself sitting in Red Simpson’s trailer at 6 AM, swapping songs and stories with a man he considered a hero, and who country music has so unfortunately forgotten over time.

Bob Wayne: When I first started touring with Hank3, mainly Andy Gibson (Hank3 steel guitar) turned me on to him. Basically when we’re on tour and rolling down the road, we’re listening to music that we love, and turning each other on to music. Andy was like “Man, you’ve got to hear Red Simpson,” and he has all his CD’s. As soon as I heard it, I immediately fell in love with it and we would constantly be listening to it. He’s always singing about truck driving, or being a highway patrolman. We just thought it was so funny that was his only two topics pretty much. We obsessed over him for years. I was a huge fan, but I never looked him up to see what he was doing. I knew he was still alive but I figured he was really old.

Trigger: He must have been a big influence on your music as well. Your 2nd album was 13 Truckin’ Songs and since then you’ve put out even more trucking songs.

Bob Wayne: Definitely. When we we’re recording (with Andy Gibson), he was one of the guys we would go to to get the sound we were looking for. We’d listen to Johnny Paycheck, Red Simpson…just pull up these records and listen to them, and we really listened to Red Simpson’s guitar players. In fact we gave him a little tribute in the song “Mack.” It’s kind of subliminal, it’s in the background, but there’s a little guitar lick in there about Mack the truck driver. Red’s sound is just amazing.

Trigger: So how did it come about that you were hanging out with Red Simpson in Bakersfield and all of a sudden you’re helping book him at the Muddy Roots Festival?

Bob Wayne: It goes back to my guitar player Ryan (Clackner). He’s got a really big beard. He was in downtown Nashville–this goes back to last summer I think–and he was just sitting there hanging out, and this woman came up to him that was probably in her 60’s, and came up to Ryan out of the blue and said, “I just love your beard, and your aura.” She told him, “I work at the Crystal Palace in Bakersfield.” It’s a famous museum and restaurant down there in Bakersfield, and she gave him her number and said if he was ever in Bakersfield he could have a free tour or whatever.

This was all before Ryan joined my band. So he joins the band now, and we’re in Bakersfield and he ends up calling this girl and she comes to our show. We get to talking and I mentioned Red Simpson, not knowing she knew him or anything like that. I said, “I love Bakersfield, this is where Red Simpson is from.” And she said, “Do you like Red Simpson?” and I said, “I love Red Simpson, you don’t even know.” About 15 minutes later she walks over with the phone and says, “Someone wants to talk to you.” I’m like “Okay?” And I get on the phone and it’s like, “Hey, this is Red. How’s it going man?”

We started talking. Ended up he knew Donnie Herron of BR549 who now plays with Bob Dylan and whose played on all of my albums. Donnie used to live in Bakersfield. So we had that connection. And then Red was like, “Why don’t you come over tomorrow morning and we’ll drink some coffee? We’ll trade songs.” Just listening to him talk, I’m such a fan of his–like the way he laughs, he gives a little “heh” like he does at the end of some of his songs I was like, “Oh my God this is really him.” I was a little star struck. This is one of my heroes. He says, “How about 6 AM?” and I’m like, “Oh my God.” He’s 78 I think, so he’s up there. So I got up early, none of the band wanted to go that early.

He lives in a trailer park in Bakersfield, right in between the cemetery and the dump in this old ass trailer park. He’s got two old Cadillacs sitting out in the front, just like my old Cadillac limo. We ended up sitting there talking for hours, drinking coffee. He showed me all his demos, he played me all the unreleased Red Simpson songs that he’s just written. He’s just sitting in his trailer writing all these songs. He said, “Man, I’d really like it if you’d cut this one.” He gave me a couple of songs he really wants me to record. I asked him, “Do you still play gigs?” And he said, “I play down at the nursing home every Monday night for a free meal.”

So anyway we ended up hanging out all day until I had to leave. We we’re driving up to the next gig and I thought, “Man, I wonder if he would want to play Muddy Roots?” So I called Jason (Muddy Roots promoter), and Jason said, “Oh hell yeah.” So I called up Red and he said, “Well, I don’t have any band up there. And so I said, “We’ll learn your songs and do a good job.” Andy (Gibson) was really excited too. He said, “One minute we’re driving down the road listening to Red Simpson, now we’re going to be playing with him!”

Trigger: This is all so appropriate because the Country Music Hall of Fame, their big exhibit is highlighting the Bakersfield Sound, which of course Red Simpson was a part of as much as anybody. It’s all about finding these old guys that time has forgotten, and giving them the props that they deserve.

Bob Wayne: Yeah, and it was funny because after I called him, about 10 minutes after he called me again and said, “Hey man, thank you so much for doing that. And uh…if you can get me any more gigs…” (laughing). So I’ve been putting out some feelers for him. Now I’m friends with him, it’s weird. We call, I talk to his wife and stuff. It’s crazy.  — Purchase Tickets to the Muddy Roots Festival 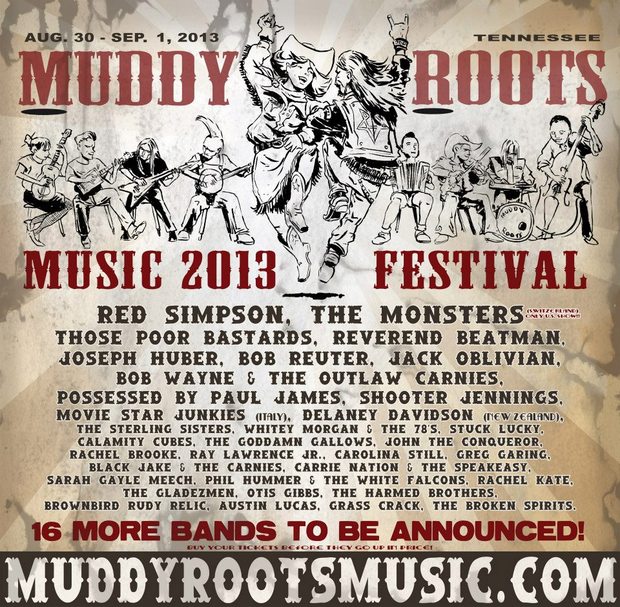