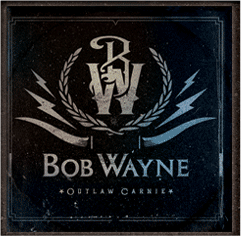 Today was going to be the release date for Bob Wayne’s new album Outlaw Carnie, but despite a big press push the last few days, it will not come out until January 25, 2011. Wayne had originally been warning folks the new album wasn’t going to be out until early 2011, but then Oct. 26 had been thrown out there as the date. The new album also at one point was going to be called “From The Camper to the Cadillac.” It includes a few new Bob Wayne songs, and new recordings of some of his more well-known songs from three previous independent releases.

Meanwhile Bob has been driving around the country in a limo with steer horns tied on the front, renting  troupes of midgets to help him record videos for songs like “Driven By Demons,” and most recently touring with Th’ Legendary Shack Shakers. Now he’s doing his own tour with the ever-revolving Outlaw Carnie lineup that at the moment includes Billy Cook from the .357 String Band on lead guitar, and the very intriguing (and very dishy) Liz Sloan on fiddle.

To see a female fiddle player in Bob’s band was unique enough, but when I started cyberstalking, the only other reference I could find was her playing with Leroy Virgil of Hellbound Glory. Yes, this girl is a part of the overall underground country movement, whether we (or her) knew it or not.

Bob Wayne will be in my neck of the woods later this week, and I hope to get the skinny on the new album, the new fiddle girl, etc., as soon as MIT gets back with me on my request to have my molecular structure split so I can be in two places at once. See, the same night Bob Wayne is playing, so is Whitey Morgan & The 78’s in Luckenbach.

As I attempt to bend the laws of physics to my will, please enjoy the following videos featuring Bob Wayne and the current Outlaw Carnie lineup: