Bob Wayne Talks “Back To The Camper”

On Monday (4-21), The Outlaw Carnie Bob Wayne will be releasing his latest album called Back To The Camper. It will be his first independent release in the United States after releasing two album with the heavy metal label Century Media, though Bob is still signed with the label’s European counterpart, People Like You. Back to the Camper symbolizes that Bob’s back to the DIY style of music, and the album marks a renewed attention to the story side of his songwriting style. Before a show at Austin, TX’s White Horse honky tonk, I sat down with Bob to talk Back To The Camper and catch up with his other doings.

Tell us about the album. Give us the scoop. What can people expect? 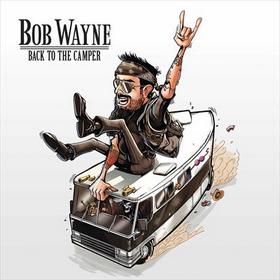 Every record I’ve done so far I’ve been pretty happy with. This one has got a lot more story songs. It’s got a couple of hellraiser-type “yee-haw!” songs. But I get a little bit more into my storytelling side. I spent a couple months at my property in Alabama, and I just sat by the fire with my banjo and guitar. I don’t know, the story songs were just really hitting me.

I got a duet on there with Elizabeth Cook. I actually wrote that song a couple years ago and I’ve been looking for the right girl to sing it, and the voices just haven’t quite been what exactly what I’ve wanted. I’m pretty picky, especially with that song because I really liked it. So one night I was watching Squidbillies, and I heard her singing, and I dropped everything and said, “Who is that?” My buddy was like, “That’s Elizabeth Cook.” I found her on Facebook, I sent her a shitty iPhone recording of the song and was like, “Hey, I heard your voice, I’ve been holding onto this song forever.” She wrote me back, “Hell yeah!” Turns out she just lives down the street from Andy Gibson [the engineer & Hank3 steel player] and she’s really busy. She ended up coming over and nailed it.

Red Simpson. Me a Red put this song together. Recording it with Andy Gibson—Andy knows his country music. Andy knows all things country. Andy was the one who showed me Red Simpson ten years ago. We’ve done a lot of miles listening to him. Now me and Red are really good friends. We talk on the phone all the time. It sounds like classic Red Simpson with a little bit of a darker tone to it that Andy kind of brings with his steel. But the song is positive. It’s called “Dope Train” and it says, “Don’t get on the dope train, don’t get on the devil’s dope train.” It’s all anti-drugs and taking about “trust in the Lord” and all this stuff.

There’s this ballad I wrote about my Great Great Great Aunt. My Great Aunt from Ireland was a famous pirate queen, and I was actually on tour in Ireland and I felt close to her, and I was driving by her castle, and I ended up writing this song for her. I always write about the female element. There’s always a kind of strong, female element: Liza, La Diabla.

Overall I’m super, super happy with how that all turned out. It has a different feel. I’ve had some people bitch about the cursing and whatnot. There is a couple cuss words on here, like on one song “Sam Tucker”. But that’s just because what else rhymes with “Tucker”? You know what I mean (laughing)? It’s a rhyming game. But overall it’s a pretty family friendly record besides those couple words.

So you’re still with People Like You which is over in Europe, but the album is Back To The Camper which is hyperbole because you’re self-releasing it in the States, right? 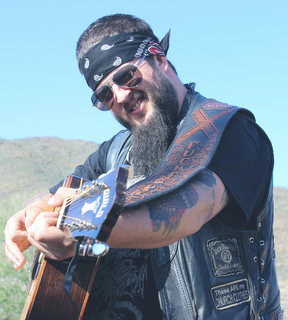 Yes. Century Media owns People Like You. In Europe, they’ve fucking killed it. They’ve done a really good job. When you join with someone like a record label, it should be a team thing where both sides are helping each other out. I brought the music, and their job was to help me get it out there. And in Europe, they were making phone calls, getting us on big festivals, putting their neck out to push us, and now we’ve got a bunch of big festivals. They really helped us, so I’m really happy with that partnership.

With the USA, it wasn’t that they didn’t try or anything, I just don’t think it was that great of a fit being that they were more metal where the Century Media in Europe had a more punk label. So we’re more punk; we kind of fit into that a little bit. We’re not punk, but we’re a punk country kind of hillbilly, you know. We have that edge, so they got it. Whereas Century Media America with the newer metal type stuff wasn’t anything like what we’re doing. So I gave them one more record in Europe, and I took my rights back to the rest of the world, which I’m happy with because I don’t mind burning CD’s. People don’t go to Wal-Mart to buy our CD’s anyway. We sell our CD’s at shows. For me, it’s better financially. No middle man, just straight from me to you. And Back To The Camper kind of symbolizes that I’m burning now again in the States.

Now you’ve got a place in Alabama. You’re originally from the Pacific Northwest, your recording apparatus is in Nashville, and you decide to hoof it down to Alabama and put your stake there. Why Alabama?

Well you know it’s funny because I have that song “Everything’s Legal In Alabama”, but it has nothing to do with it. Yeah, I ended up in Nashville, and the thing is I’ve been touring, like I had a camper parked out at Shelton’s (Hank3) house for years when I was working for him, and then I had my van out there, kind of living out of my van and campers for years, and then I bought a John Deere motorhome and was rolling around in that. All the while I haven’t paid rent since 2004. Any bit of money I made I was saving up. I always had a vision of a place out in the woods somewhere where I could put all my campers, have my band park their campers where we wouldn’t have to pay rent, we could just live for free out on the land, and tour. Basically I have this vision for Carnie town. My band members and family and friends who want to come out there.

Well I just happened to be on tour and I met this guy in Alabama, we were playing, and him and his wife were talking about this property that they weren’t gonna get that was like marked down from $40,000 to $15,000. We I went out there and looked at it. It was five acres of woods out in the middle of nowhere next to a lake with a house on it. A condemned house, but the power worked. I offered $12,000, they said “yes”. So for $12,000 I bought Carnie Town. And I’ve already started dragging all my cars out there. Right now the John Deere’s out there, my limo, the van, I’ve got campers. So yeah, Carnie Town is born now. It was mainly a price thing. It was just the fact that it was $12,000. My John Deere motorhome was $18,000, so my house and five acres was cheaper. 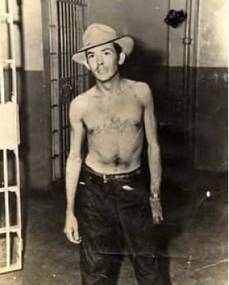 And where roughly is it?

It’s actually cool, it’s right by Kawliga. Hank Sr. actually had a cabin five minutes from my house in Kawliga, Alabama. You know the famous picture of Hank Sr. in jail, where he’s all skinny and in jail? That jail is five minutes from my house. I actually went to the jail to see it. The town is where Hank Sr. used to hang out and party. It was kind of a good omen for me when I found out.

Yes, definitely. Tonight we had three people that drove here from Mexico City with their 8-year-old son. I said, “So you came here for something else?” and they were like, “No, we came here to see you.” They drove from Mexico City to Austin to see us. So the growth thing, yes, it’s cool that more people show up to shows. But I’m a lifer. I was doing this for years when ten people were showing up every night, and that didn’t stop me. I didn’t care that ten people were at our shows, because ten people got up off their asses. I know what it means to get up and go to a show. People are excited and they like the music. I can’t wait for this new CD to hit because I’m excited to share it with everybody. I’m all about the songs and the stories. I can’t not write songs and play music.