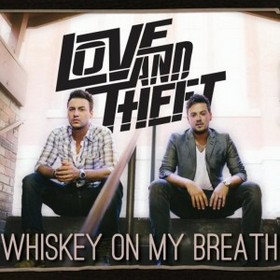 What’s the old saying? Even a blind squirrel finds a nut every once in a while? Well pop country über DJ Bobby Bones went foraging through the vast wasteland of mainstream country and apparently happened upon the morsel that is Love and Theft‘s song “Whiskey On My Breath.” Now the song has become the latest beneficiary of the “Bobby Bones push”—where the syndicated iHeartMedia morning show host tasks his slavish listeners to purchase the song on iTunes until it reaches #1, resulting are a newfound country music star; or in the case of Love & Theft, a rejuvenated career.

Love and Theft already had a #1 song called “Angel Eyes” in 2011 when the duo was still signed to RCA Nashville, and before they became one of the most high profile victims of the Bro-Country epidemic and the axe of former Sony Nashville CEO Gary Overton—a.k.a. the “If you’re not on radio, you don’t exist” guy. After being dropped, Overton told the duo point blank it was because they weren’t Bro-Country enough. So then they were out on the streets and decided to record a stripped down record. “Whiskey On My Breath” became the first single.

The song was first released way back on November 23rd of 2014, though it really wasn’t until early January of 2015 that it began to be recognized by country music media, and it wasn’t until late May when the official video for the song was rolled out. At some point Thirty Tigers took the song under its wing, but it still floundered on radio, and never made it past #50 on the Country Airplay charts despite lots of critical reception, including from Saving Country Music and other outlets.

Now Bobby Bones, over a year after its initial release, has gone crazy over “Whiskey On My Breath,” and spent Tuesday (1-26) chronicling its rise to #2 on the iTunes charts as he commanded his many listeners to purchase it. Remember, it was a similar effort that propelled Chris Janson’s song “Buy Me a Boat” to the top of the iTunes charts, and eventually landed him a major label deal with Warner Bros. Nashville. “Buy Me a Boat” was ultimately released as a proper radio single, and has since been certified platinum. Is Love and Theft now headed for a similar fate? We will have to see, and it couldn’t happen to a more worthy song.

But it all still feels smarmy that we’re putting so much power to choose who makes it, and who doesn’t into one person’s hands. The beauty of country radio when it was made up of powerful local and regional voices was the pulse of the country music fan could be read by many different fingers, while there were more sets of ears out there looking for the next great song or artist. The result was the best music rose to the top. Radio consolidation has all but done away with that system and put syndicated super-jockeys and mid-level corporate bureaucrats in charge of who audiences numbering in the millions get to hear. And in the case of Bobby Bones, he’s not even native to the genre in which he’s making such monumental decrees.

READ: Review Love and Theft’s “Whiskey On My Breath”

“Whiskey On My Breath” should have been a hit a year ago, but country radio failed it. Luckily for Love and Theft and with the help of Bobby Bones, the happy ending may still be written. But it’s the same system that kept “Whiskey On My Breath” down initially that’s now responsible for it’s big rise. In the meantime, dozens of other worthy songs are left unheard, while a broken system controlled by too few pushes terrible selections to the top of the charts.