I first heard about the rambunctious and ribald Bobby Joe Owens through guitar maestro Zach Sweeny—Wayne “The Train” Hancock’s lead guitarist that has also played with folks like Lucky Tubb, Danny Kay & The Nightlifers, and many others. Sweeny appeared on Bobby Joe’s first two albums, including 2010’s Watermelon Tea that prominently featured the Squirrel Nut Zipper’s Jimbo Mathus. Bobby Joe always seemed like an interesting character, but his recent release Liquor, Love & Laughter was my first chance to get a face full of his full tilt sidesplitting musical antics.

Recorded at the famous Cash Cabin—the cabin formerly owned by Johnny Cash in Hendersonville, TN that has been converted into a studio—Liquor, Love & Laughter is not a particularly slick album, with little flubs and hiccups here and there, and some mixing issues. But damn if this album isn’t a real good time and a wild ride from beginning to end.

Bobby Joe Owens is a guy who didn’t even start doing anything in music until 2006 when he started writing songs under the name “Robert J. Thompson.” He doesn’t play an instrument, is probably not going to win any singing competitions, but his songs will jerk tears from you, whether you’re laughing out loud, or relenting to a truly heartfelt ballad. The former Marine Corps veteran names off his occupations as inventor, entrepreneur, philanthropist, and despite all the signs that he comes to the music realm from the outside looking in, his songwriting will kick the ass of many who claim music as their full-time gig.

Liquor, Love & Laughter starts off with with a straight up rockabilly tune called “Hopeless Romantic,” and though the song captures a fun vibe, you start to worry, especially with a backing band by the name of “Retro Deluxe” that getting into this man’s music will require either a quaffed pompadour or Betty Page bangs. But one of the best parts about Bobby Joe Owens and this album is that it is all over the place as far as influence, touching on just about every texture of the American roots world, from straight up country and honky tonk, to singer-songwriter type Americana-feeling tunes, to no holds barred off-color comedy songs. 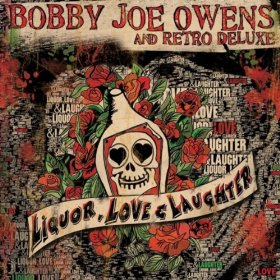 After the rockabilly intro, Owens careens straight into country music with the cunning and crafty “From Beer To There.” The drinking theme is carried over through most of the first half of the album, including the salty “Long Time Until Next Time” and “Drinkin’ My Heartbreak Away.” And then Bobby Joe takes you completely by surprise with an exquisitely-written, somber and sober ballad evoking the feeling of sincere heartbreak called “Don’t Forget To Forget.” Even if you think this dude is a complete goof, “Don’t Forget To Forget” is one diamond in the rough worth digging for. So is the spatial and mood-drenched “Tennessee Tar” that could come from your favorite songwriting-focused Americana band.

As the album progresses, the comedy songs start coming quick and often. No, “My Dickel” is not about Bobby Joe’s favorite uncle named Richard, but it will leave you in stitches like a head first dive off a couch into the side of the coffee table. “Friends Don’t Le Friends Face Book Drunk” (yes two words for “Face Book”) is the funny song whose off-color wit is what forced Bobby Joe Owens to include a Parental Advisory sticker on this album, and the jokes keep coming (no pun intended) in “Text Me You Love Me.”

Though I spoke about the little recording flubs here and there on this album, it is nothing short of expansive in how it was fleshed out by Retro Deluxe and a cast of mercenary musicians. Every song gets expansive treatment with quality and tasteful musicianship, backing vocals, and those extra treatments like mandolin, or the piano on “Don’t Forget To Forget” that fits the song perfectly instead of using what was easily available.

Not for everyone, but like a Roger Miller-style approach to country, Bobby Joe Owens and Retro Deluxe leave you quite entertained with a combination of wit and substance that speaks to a sincere appreciation for the joy of music.