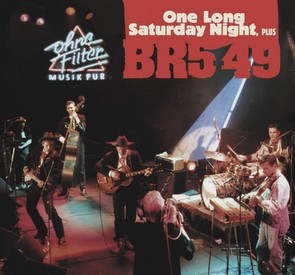 Neotraditional throwback country band BR549 may be no longer, but fans are going to get to hear (& see) some new music from the band that launched Chuck Mead and Gary Bennett, and helped put the Lower Broadway portion of downtown Nashville back on the map.

Arriving on American shores on November 20th, Germany’s Bear Family Records is releasing One Long Saturday Night—a 23-song CD and companion DVD capturing the original lineup of the band at the height of their powers as they perform classic country hits and a handful of originals live for the German TV show Ohne Filter. The original lineup (designated BR-549, with a dash at the time), included songwriters and singers Chuck Mead and Gary Bennett, multi-instrumentalist Donnie Herron, drummer “Hawk” Shaw Wilson, and bassist Smilin’ Jay McDowell. The CD also includes four tracks from a concert in Japan the band played the week after.

BR-549 signed to Arista Nashville in 1995 after taking Lower Broadway by storm. The band played a now legendary residency at Robert’s Western World at a time when the area near the Ryman Auditorium was completely run down. The enthusiasm of bands like BR-549 helped revitalize the area to the hopping part of town it is today. “We saw it as our duty to bring the spirit of Robert’s Western World to every place we went,” explains Chuck Mead. “When I see and hear this DVD and CD set, it feels like we actually did that.”

Along with a slew of covers and songs with other renditions already heard on previously releases, One Long Saturday Night includes some new stuff never heard from the band, including a version of Hank Williams’ “Lone Gone Lonesome Blues,” Ray Price’s “Heartache by the Numbers,” Carl Perkins’ “Gone, Gone, Gone,” Carl Smith’s “Go Boy Go,” Hawkshaw Hawkins’s “Lonesome 7-7203” and two tunes Bob Wills made popular—“Right or Wrong” and “Take Me Back to Tulsa.” It also includes a previously-unreleased song from Chuck Mead called “Hometown Boogie.”

BR549 was one of the catalysts of the mid to late 90’s neotraditionalist moment, and also included notable members Chris Scruggs and Geoff Firebaugh over its 13 year run. The band released six albums and a few extended plays, and reunited briefly in 2012. Chuck Mead and Gary Bennett went on to launch solo careers, and continue to tour and release records today.