Brad Paisley has been making quite the spectacle on Twitter over the last two days, claiming to be leaking bits and pieces of his upcoming album Moonshine In The Trunk against the will of his label Sony Music. Or so he says.

The frivolity started Saturday night (7-27) as Brad Paisely took to the social network site to post YouTube links to players that featured 2-second snippets of his new songs, all while supposedly stirring the ire of the “suits.”

“I’m going rogue.” Paisley said. “The label doesn’t know I’m doing this. Seriously. But I made a Moonshine Preview teaser. Don’t tell. Better listen to this while you can. I bet the label tries to pull it down. Clock’s ticking.”

Brad then posted links to the Youtube players, and later screen shots of supposed communications from Sony who was apparently trying to “shut him down” as he continued on his quest to release the teasers. “Hurry up and Listen. I’m going to dentention. Breakfast club!!! Here I come.”

Later Brad Paisely posted, “I really do love my record label. Especially for puttin’ up with my $h@t. But I love y’all even more. Ha! Priorities. Okay suits. Catch me if you can. Take 2: enjoy.”

And this continued with subsequent tweets as Brad Paisley complained that the YouTube players were getting yanked by Sony, and posted further players to circumvent them.

Then similar hijinks happened again on Sunday night. After Brad claimed he was restricted from posting the YouTube previews by Sony, Paisley supposedly recruited Ludacris—rapper and co-judge of ABC’s new reality singing competition Rising Star—to post the players for him. “I promised I wouldn’t post the link myself. Me. Myself. I. I’d love to post another link but they’re watching me like a hawk but I bet they’re not watching Ludacris.”

All of this was happening with ABC’s broadcast of Rising Star bisecting Sunday’s Twitter event. “OK great show everybody! Now back to the rebellion!” Brad said afterwards, along with more screen shots of supposed emails and texts from management. 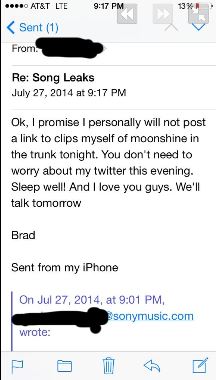 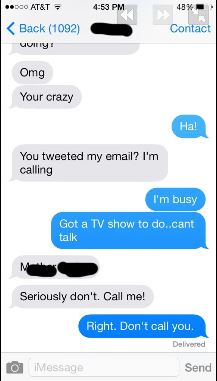 Normally an artist rebelling against their label, even if that artist or their music doesn’t particularly fit the style of what Saving Country Music would condone, would receive nothing but cheering and steadfast support here. And it isn’t as if the Brad Paisley/Sony Music relationship is without problems. Brad has ongoing court dealings with Sony over the amount of royalties he’s been paid, but even in his “rebellious” tweets Brad said, “I really do love my record label,” and there’s never seemed to be a strain in the working relationship between Brad and Sony.

This Brad Paisley leaking episode is not him acting out against his label, it is pure marketing. Maybe Sony did not know that Brad was planning to leak the 2-second snippets, maybe they did. But either way, the entire episode was planned out, choreographed, and carefully executed by a marketing team assembled by the Brad Paisley camp. Whether Sony was in on the ruse really is inconsequential.

Normally when an artist rebels against their label, there’s a means to an end. All we have here is two seconds snippets of songs, and a remix of his already-released single “River Bank” with Colt Ford. There’s no freedom gained by Paisley, or any particular value for the consumer by posting two-second bits of songs. This is all to create a stir in the public, and by attempting to portray Brad Paisley’s actions as spontaneous, let alone rebellious, it is an insult to the intelligence of the country music fan. The lines in the tweets and texts are clearly canned, and it’s no surprise Brad was in cahoots with DJ Bobby Bones to release the “River Bank” remix. Bobby Bones is another character who is apt to fabricated attention grabs full of canned jargon an ambiguous gripes about “suits” shutting him down.

There are artists in country music and elsewhere that truly labor under unfair, unethical, and sometimes illegal conditions from labels, sometimes with tongue-tying clauses in their contracts that don’t even allow the artists the ability to speak on the matters publicly. Many artists were, and are resigned to this fate under Curb Records, and have to fight protracted and costly legal battles to gain the ability to release their own music, including Tim McGraw, Hank Williams III, and others, sometimes having to wait half a decade between releases as their careers lose momentum. To use this unfortunate reality of country music for many artists as marketing is in poor taste, and Paisley’s own potential short changing by his label for royalties should have made this even more top-of-mind.

Once again Brad Paisley is resorting to headline-stealing histrionics to try to remain at the top of the country music mindset in a move that undermines his natural talents, and his standing as one of mainstream country music’s good guys.