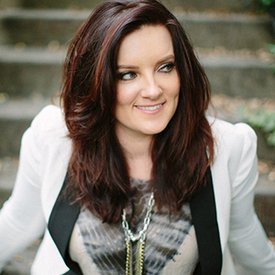 Why do the Grammy Awards matter? Well even if you don’t win anything, the exposure as a performer is just about priceless for those that get the opportunity. Brandy Clark was up for Best Country Album for her 12 Stories release, and Best New Artist at the 57th Grammy Awards, and walked away with neither. But her performance with Dwight Yoakam on her song “Hold My Hand” landed Brandy the largest single percentage gain in song sales amongst all performers on the night, and also saw her album get one of the biggest boosts.

After the intimate, acoustic Brandy/Dwight version of “Hold My Hand,” sales spiked a ridiculous 23,871%. Yes, that’s a comma, not a decimal point. Of course it helped that sales for the album track were negligible to begin with, but with the help of the Grammy Awards, she sold and additional 5,000+ downloads. Coming in second amongst performed songs was Beck’s “Heart Is A Drum.” It sold an additional 3,000 downloads for a percentage spike of 2,995%.

Brandy’s 12 Stories ended up 3rd on the list of biggest-gaining albums post Grammy bump in percentage. The album moved an additional 2,000 units for a 275% gain. The biggest gainer was Beck’s Best Album winner Morning Phase, which saw an increase of 10,000 units sold for a 945% spike.

Brandy Clark and Dwight Yoakam performed “Hold My Hand” right after Eric Church took his turn on the Grammy stage—only appropriate because Brandy and Dwight bonded with each other while opening for Church on “The Outsiders” tour in 2014.

“I was on tour with Dwight and Eric Church, and I met him and loved him,” Brandy says. “And then when the Grammys asked me to perform, they said they wanted eight names of world-class guitar players and singers that would come and do it with me and make it a Grammy moment. And Dwight was one of those names, and he was their first choice.”

“I became a fan walking the halls listening to her performances before I’d go on at night,” says Dwight of Brandy. “I loved her melodies. We talked about actually writing together, and we haven’t sat down to do that yet. But this opportunity came up. They said, ‘Will you came and play?’ And I said I’ll try not to wreck it.”

JUdging from the percentage spikes, the case can be made that Brandy Clark and Dwight Yoakam’s “Hold My Hand” performance was the most impactful music moment of the night.