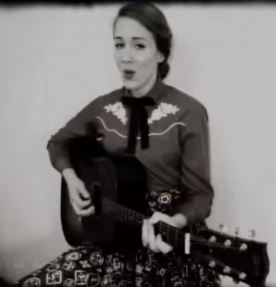 Austin, TX-based singer, songwriter, and guitar player Brennen Leigh has been seeing a man on the side—the left side that is—and has become so smitten she’s decided a tribute album is needed.

You can’t look anywhere in the Austin independent country scene without seeing Brennen Leigh’s name. If she’s not fronting her own band, she’s playing in any number of other projects as a side musician. Or she’s in the studio singing harmonies or recording guitar tracks, or contributing a song to someone else’s project like she recently did to Lee Ann Womack’s The Way I’m Livin’ album. She’s one of those musicians who is doing something seven nights a week, and isn’t too proud to play second fiddle if that’s what the music calls for.

Recently Brennen announced that she wanted to make an album strictly of Lefty Frizzell songs. Though Lefty may have never had the mystique of Hank Williams after his tragic death, or the star power of Johnny Cash, Frizzell’s impact on country music has been one of the most under-appreciated and often-overlooked contributions to the genre. So Brennen has rolled up her sleeves, launched a crowdfunding campaign, and is cutting a full blown Lefty Frizzell tribute record to do her pert to revitalize the legacy.

Compelled by just what would inspire such a self-imposed challenge, I reached out to Brennen to find out what the inspiration was behind the project.

Why make a tribute to Lefty Frizzell?

I’m a songwriter first, so recording anything I didn’t write is a departure for me. The Austin country dance crowd has been particularly supportive of my original material, as have a lot of other folks. I was in the middle of a couple of different projects when I became borderline obsessed with a Lefty compilation LP from the 70’s. I’d been a fan of his 50’s material since I was a teenager, but when I stumbled on his work from the 60’s I realized what a genius he was.

He taught me a lot about singing, like, you don’t have to pop out the veins in your neck to sound good. Sometimes all the song calls for is a whisper. Noel [McKay] and I tour a lot in the car with our coon dog, and we take turns driving (Noel and I do, not the dog). I usually take the midnight to 6 a.m. shift and that’s when I started listening to Lefty on headphones for six hour stretches while jacked up on coffee every night. Those songs got burned into my brain. I listen to them over and over. I can’t really say why I’ve gone so crazy about Lefty. His approach was so sensitive, so unaffected, so full of feelings, including humor. Though he’s often name checked, he’s under appreciated for his contribution to music…not just country music. He invented a singing style. He came from nothing, from dirt, and became arguably the most influential singer in country music. I started to imitate him, to dissect how he approached the delivery of the songs. People tend to think of singing as this God given thing that doesn’t take any work, and yes, part of it is natural talent. But if you listen to any truly great artist, you can hear how they learn and evolve. I’m more interested in Lefty’s method than his end result. What was going on in his mind?

What can folks expect from the tribute?

Lefty’s catalog is huge, and we couldn’t record all of them. I wanted to include a few of his signature tunes and a few off the wall tunes you might not expect. About half were actually penned by Lefty and half were songs written by others that Lefty made his own. It was hard to pick. I know I’m going to disappoint someone because everyone’s got their favorite. It was painful trying to choose only 12. There’s not really a theme except these are the songs that grabbed me for what ever reason. It’s not the greatest hits.

The band is awesome in the true sense of the word, and they’ve been as enthusiastic as I have about the project. Brad Fordham (bass), Lisa Pankratz (drums), Noel McKay (electric guitar and harmonies) and I spent hours dissecting the tunes, figuring out how to keep true to the spirit of the originals without ripping off Lefty too much. We tracked all of the above live with T Jarrod Bonta on piano (the sugar on top, and it’s just beautiful). James Shelton played pedal steel and dobro and it was magic. Andy Lentz played fiddle and it’s perfect. I’ve got Chris Scruggs doing lap steel and Ted Roddy on harmonica. Cris Burns is the engineer and he’s lovely to work with. I also have a few surprises. 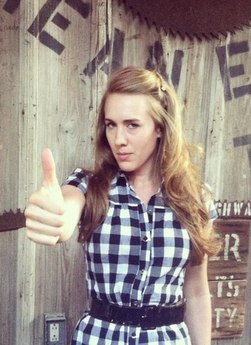 You’re known as an Austin musician, but are you from Austin originally? If not, where are you from, and and how did you end up in Austin?

I’m from the Northern Midwest; born in North Dakota and grew up in Minnesota. My brother Seth and I moved to Austin in 2002 because we were interested in the music scene. Obviously the scene has changed since then but I’ve never regretted coming here. Austin is a wonderful community.

You see your name all over the Austin country scene. You’ve played with the High Pains Jamboree, are often seen playing with your long-time duet partner Noel McKay, or Beth Chrisman of The Carper Family. Do you consider yourself a front person who is willing to play with others, or a side player who also fronts her own band, or do you even think about music in those parameters?

Historically I’ve most often been a front person, but over the years I’ve played and sung on a lot of other people’s records, which is one of my favorite things to do. I play mandolin in High Plains Jamboree and do a third of the singing. That’s a nice change for me, and I get to be silly with Noel (McKay) and Beth (Chrisman). I’ve also been playing lead guitar with Noel’s band, with Meatloaf Spaceship (Jenny Parrott’s new band), and with Teri Joyce and her band from time to time. It’s been a good mental shift for me. It’s a challenge and it’s great fun. I’ve been a lead player for a long time but I recently switched from flat top to electric archtop. What a difference that makes in a loud club.

I have immense respect for musicians who aren’t front people. They hold everything up. I like to remind the audience that we’d sound like just a couple of silly wankers up there singing about our feelings if it weren’t for the rhythm section. I’m sort of kidding, but there’s nothing that makes you want to move like a great drummer and bass player combo.

Are you sometimes afraid that Austin is too hospitable to musicians, and doesn’t motivate them to spread their wings and explore new worlds?

There is something to be said for being able to work seven nights a week, the whole time being able to go home and sleep in your own bed. Don’t get me wrong, it’s grueling sometimes. But it can be easy to get too comfortable in Austin. People come from all over the world to hear Austin bands, so I think of it as a form of touring. But I’ve made a special effort to tour outside of Texas and the U.S. as much as I can. I like to have adventures, and fans will forget about you if you don’t make an appearance in their town every once in a while.

You also have quite the name as a songwriter. Bands and artists around Austin have been covering your material for years, so has Sunny Sweeny, and most recently Lee Ann Womack covered your song “Sleeping With The Devil.” Is there a story behind how Lee Ann found that song, and what does it mean to be covered by an artist of that caliber?

Lee Ann Womack is one of the last true country singers. I admire her natural, pure style of singing. What she does takes genuine skill. I couldn’t have been more thrilled when she recorded my song. I love how country her version is. Her producer, Frank Liddell, got a hold of my album through his songwriter sister, Lise. Lee Ann is tuned into the Texas writers these days. Can’t argue with that.

What else interesting do you have on the horizon?

High Plains Jamboree is recording an EP at the end of July. I’m going to tour Norway in August. When I’m back I hope to finish up a couple of other solo projects I started with engineer Joe Beckham. I’ll be hitting the the road some more this fall and winter. I’ve also got a monthly song swap at Saxon Pub with Sunny Sweeney that starts at the end of July, and a monthly gospel thing at Stay Gold. I’m a member of Nashville based collaboration Antique Persuasion, and we recently released a Carter Family tribute on Voxhall records. Too much to list, but I guess that’s good.